The IOMR has the firm intention of participating in the polemic debate which is raging at present between classical Art and Modern Art. For this goal we must sharpen our eyes so as to find associations, exchange of ideas, elements in common so as to be able to appreciate similarities, sometimes created on purpose, sometimes occurring only by chance or discovered when one tries to analyse their origin.

Visual Art contains a special language and vocabulary based on elements which are commonly valid in all the epochs. Space, material, volume, colour, tone, texture, scale, balance, light and movement are elements which are common to all works of Art and we would add mass and sense of gravity as special elements in Sculpture. As for the approach and the particular combination each artist may have regarding these elements there lies the consequence, no doubt, of his talent, inspiration and on them will depend the final artistic result of his work, marking tendencies according to every epoch, country or artistic movement. 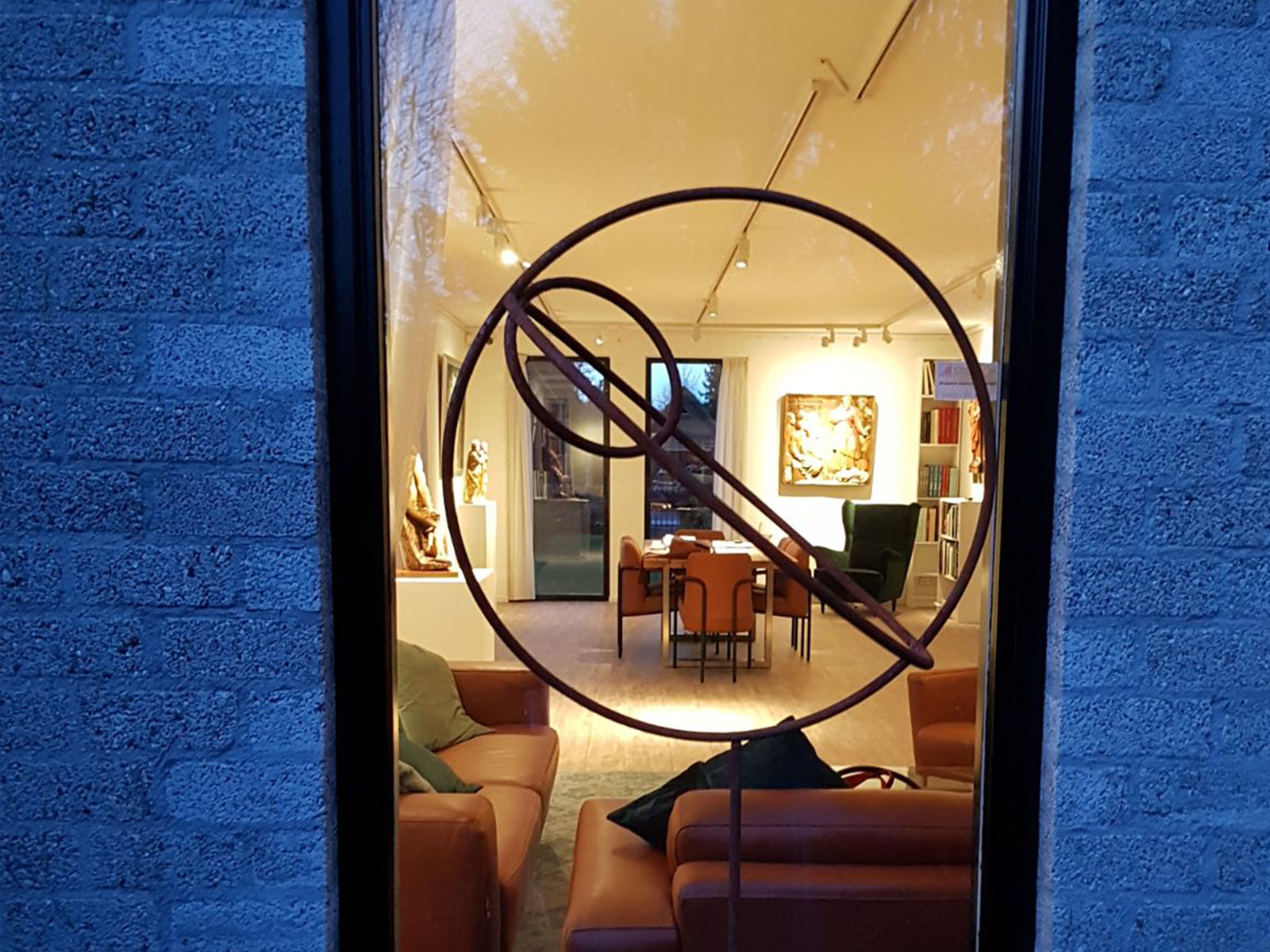 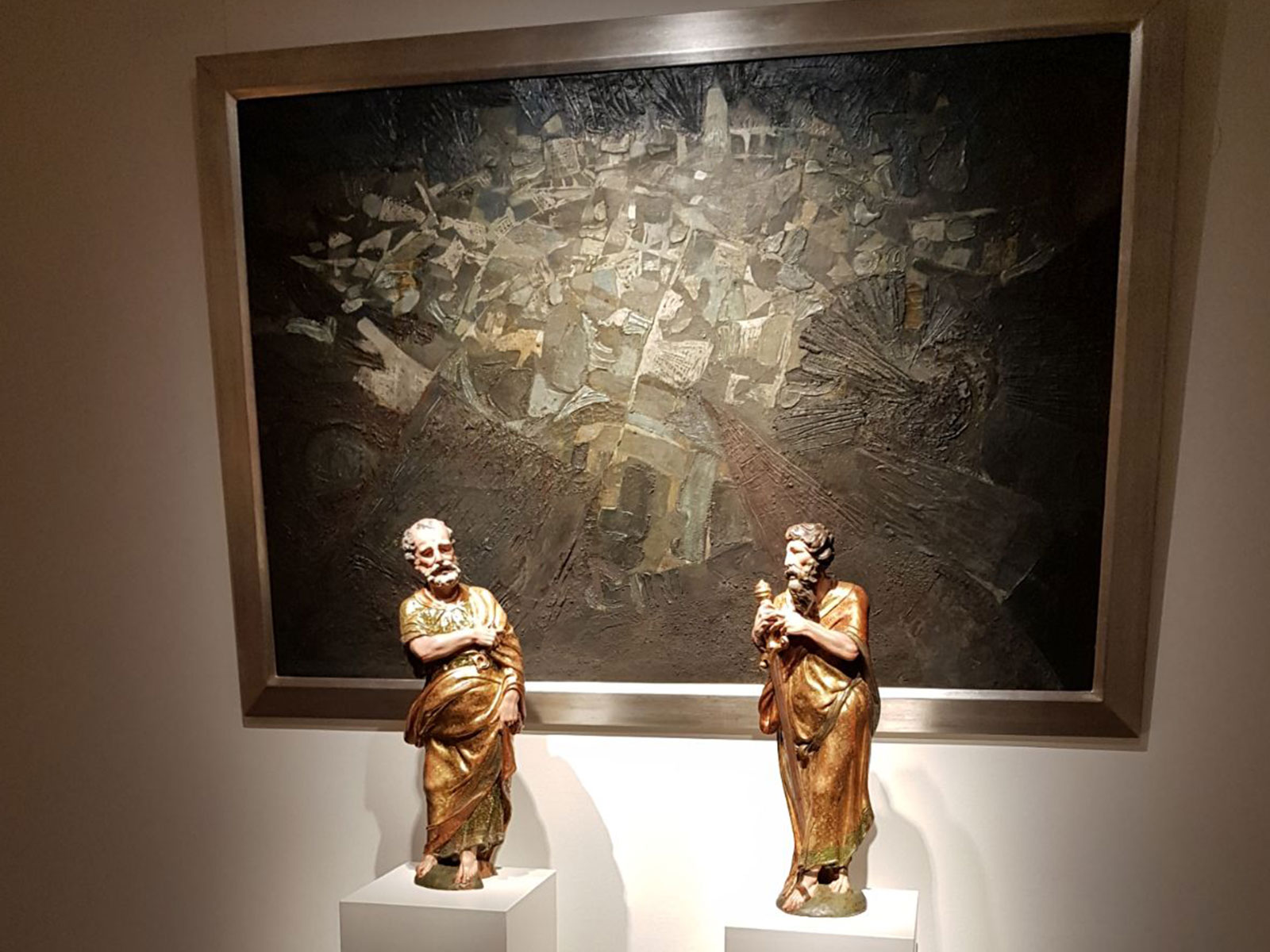 Following on these elements common to modern and classical Art, although consisting of artistic interpretations almost completely opposite, we may extract from what is apparently antagonistic the common grounds of the two Arts, which is what we are interested in pointing out. Thus, taking Picasso, for example, as the supreme modern genius, consecrated during his lifetime and historically, with a greater capacity for looking back to the past, we distinguish (among many others) a link between his “rose” period and the work of Louis Lenain which consists of a similar use in his compositions of different scales and masses for the persons depicted though they do not correspond to a natural reality but are used only to attract the spectator’s attention. The persons in both works are as if turned into stone and have a sort of halo of sadness. Another parallelism in Picasso, which Zugaza calls “geometrical”, we find in his relation to Ingres’ painting, due to the importance both artists give to the line, to the outline of the persons depicted, to the edges of objects; an element, certainly, which is very decisive in the valuation of the quality of a work of Art by those of us who consider ourselves “Connoisseurs”.

It is needless to mention the widely commented link between Picasso and Velazquez, their obsession with space, with their conception of void and also with the solidity and sense of gravity of objects.

On the other hand, there also exist sociocultural factors and the dynamic force itself liberated by the creativity of genius which indicate its own landmarks and tendencies, distinguishing, in my opinion, a classical form ( in the widest significance of the term), based, to a great extent, on the technique and manual skill of the artist and, on the other hand, what we may call modern Art which grants priority to the concept and to creative process, giving less importance to the final result. These two ways of conceiving Art are not exclusive of an epoch or a territory, but are, of course, perfectly identifiable and only on very few occasions do we find artists imbued, to the same extent, with both qualities: Leonardo, Michelangelo, Velazquez, Rembrandt, Vermeer, Picasso and Anselm Kiefer are magnificent examples of this special symbiosis.

Thus the modern tendency in Western Art evolves by means of a progressive simplification in the forms which tend to illustrate the visual appearance of things, giving greater importance to the concept of the work of art, under the influence of its daily use, which leads finally to the elimination or even breaking up of the form, thus creating a new visual language, as opposed to the classical one, much more intent on reflecting the natural existence of the external world. From the Renaissance we perceive various artistic currents which are opposed to the traditional Art which had risen in Italy and the territories of northern Europe, and it was in Spain, due to its special idiosyncrasy and attachment to the concept, as opposed to the form, that we find a greater association with modern and contemporary Art where simplification and conceptualism have become a rule. 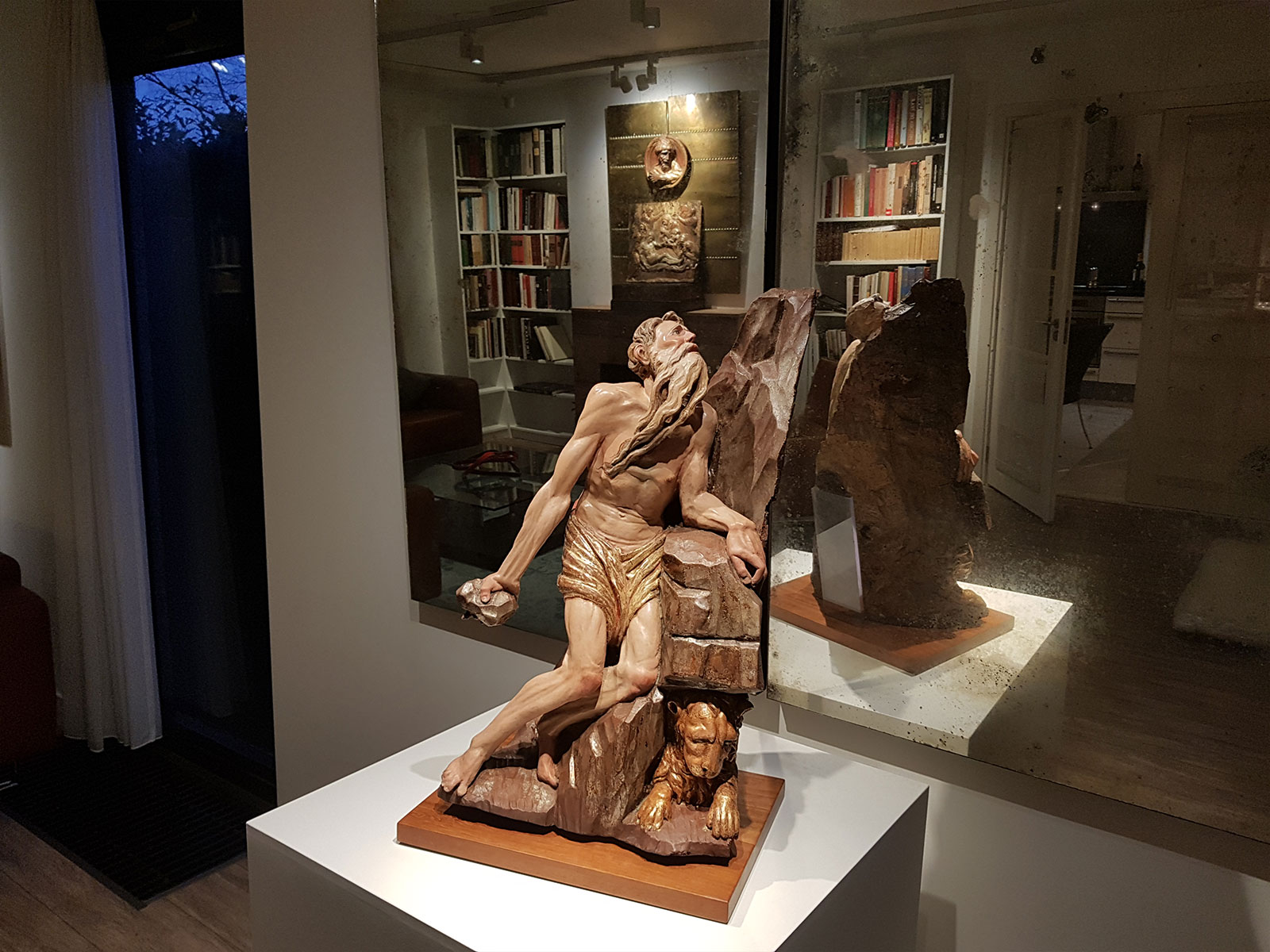 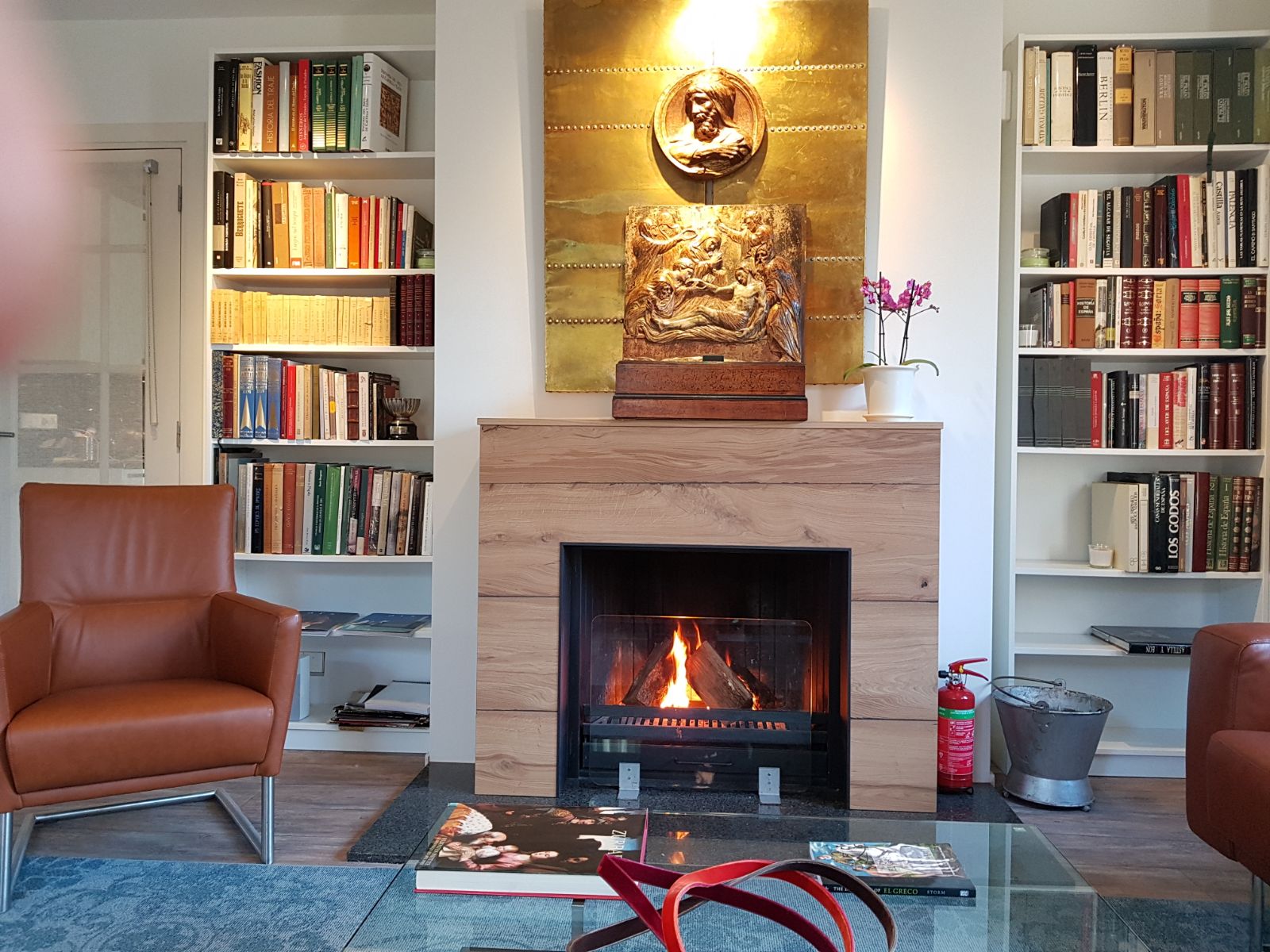 In the history of Art various geniuses stand out for their revolt against what is traditional, for their anticipation and their capacity for creating rupture and, when they are great figures, they create new forms and become in themselves new landmarks. Phidias, for being the first to humanise Art; El Greco, for his exaggerated expressionism; Velazquez, for his ability in painting what is apparent and in creating a new concept of aerial perspective in which the emptiness of space is revealed; Rembrandt, for his mystery and rough impressionistic technique; Vermeer, for being the first to reflect mimetism between a person and his environment by means of an almost “pointilliste” technique and the use of light and space which was absolutely revolutionary at his time; Goya, for being the first modern painter in all the meaning of the term; and Picasso, for inventing a new language and for hurling the Stone which smashed to pieces the concept of Art held up to that time. All of them are consecrated geniuses, creators of tendencies and recognised as such in the history of Art.
In post-war and contemporary Art, artists like Pollock, Rothco, Bacon, Kiefer or Zao Wou Ki, to give as examples artists consecrated during their lifetime, must still face History in order to clarify to what extent their work is relevant. In their capacity to renew the artistic panorama and, at the same time, to be integrated and link up with the great Masters of the History of Art, lies the very essence to be considered great for all eternity. Artistic geniuses, both classical and modern, whose creative personalities, their need to express themselves and their will to break up forms and create new ones, do not vary essentially among themselves. For this reason it is important to distinguish common grounds, to discover geometric similarities which in their volcanic creativity, link Alonso Berruguete with El Greco, Goya, Münch, Picasso and Pollock, or that which with its insinuating melancholy is distinguished in a Giorgione, Tiziano , Van Dyck, Watteau, Turner and Zao Wou Ki, or the translucent colour of a Van Eyck, El Greco, Rothco, or the fully integrated introspection of the viewer of a Velazquez, Manet, Picasso or Bacon, and the intimate association of a Vermeer with a Hopper, both enclosed in a tomblike silence, because each of them responds in a particular moment to the same type of artistic sensitivity. For this reason it is important to analyse the capacity of the Old Masters to be forerunners, but also, conversely, to look backwards to the traces of the past in the modern genius. In our opinion, in this ambivalent potential to invent and to look back to the past, lies the touchstone for distinguishing the Masterpiece which will survive as such throughout ages.

In short, the authentic genius must feel free and has always been independent; this isolation, this, in certain cases, almost autistic nature of the genius is essentially what, in my opinion, protects and safeguards him against influences and, doubtless, for this reason he would hide himself, as Vermeer and Van Gogh, or, in another context, as Rimbaud did. In fact they hid themselves so as not to be corrupted and to continue to be authentic. On occasions, the artist may only appear a genius in some of his works which, thanks to History’s judgement and his almost divine character, will be considered Masterpieces. This lack of comprehension which has usually plagued some geniuses during their lifetime may be even greater in the present world which in one moment globalizes everything, spreads knowledge universally so as to influence it and not to let anything escape; but the authentic Genius is the one who, in many cases, without having even sought it, establishes the guide lines and rhythm of Art, the Art which survives; the genius is that which opposes what is established from his artistic wealth and the freedom of his creativity so as to surprise us all, crushing and subduing us by something really great due to its novelty and depth. To Art critics, to Art collectors, to viewers of Art, it corresponds to the humble, though fundamental, task of comprehending these forerunners, of analysing their reasons, their classical or contemporary backgrounds, something which to the genius, as Picasso affirms, is of little importance because of their obsession with their work, their stamp, a work which surpasses themselves and society and is engraved forever in history.
Thus, the present challenge consists in knowing how to distinguish what is unique, what is outstanding, what will really remain as Art in a world which has the pernicious tendency of trying to govern the artist’s creativity and his inspiration by means of imposing styles closely linked to the luxury market, to high prices, promoting brands, all of which belong much more to the decorative arts than to Art itself, where the quest for beauty, the urgent need to express oneself, to break with the present and to create something absolutely new, are the principal forces which impel it, and not its commitment to society or to the taste of collectors. 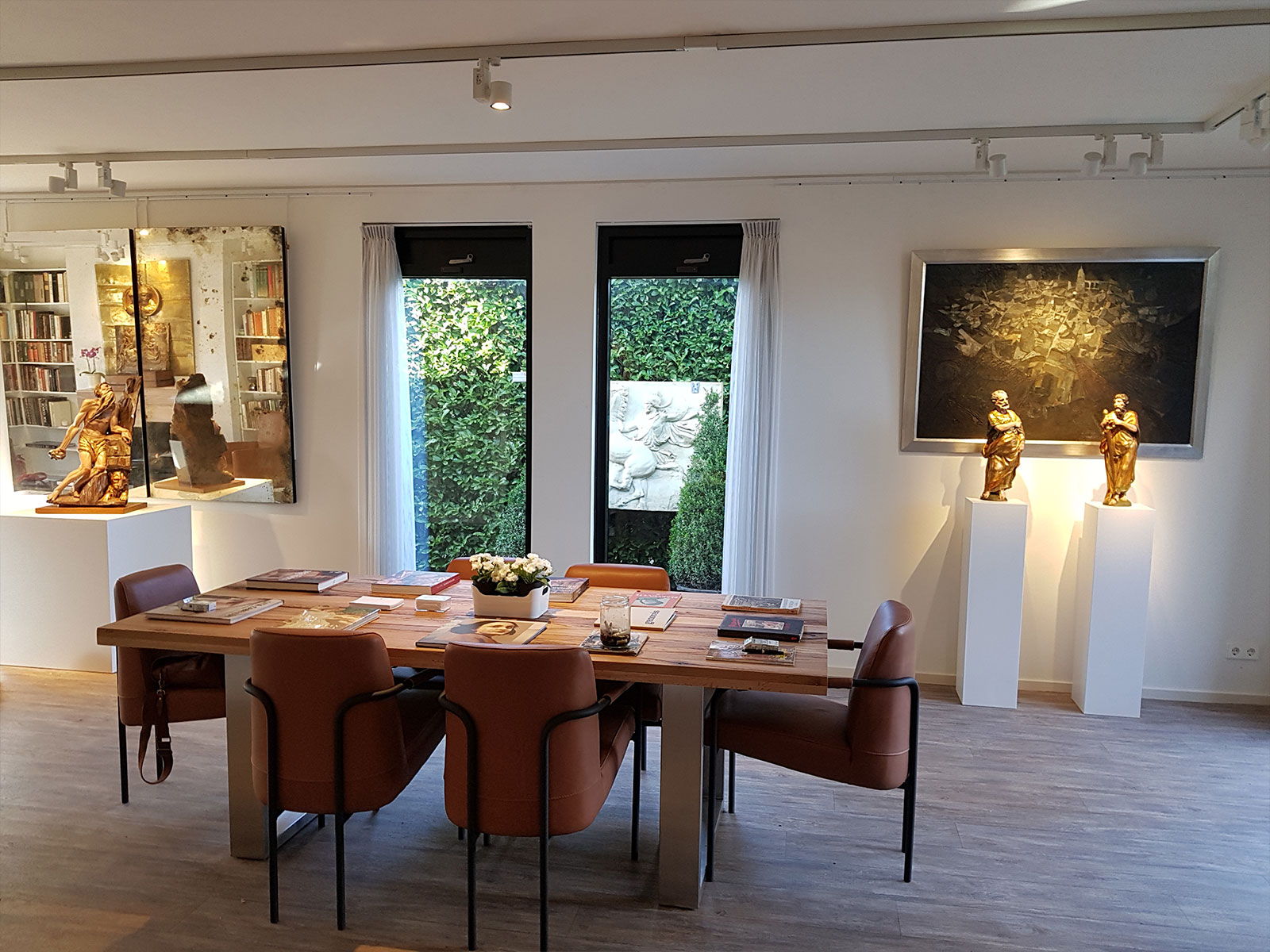 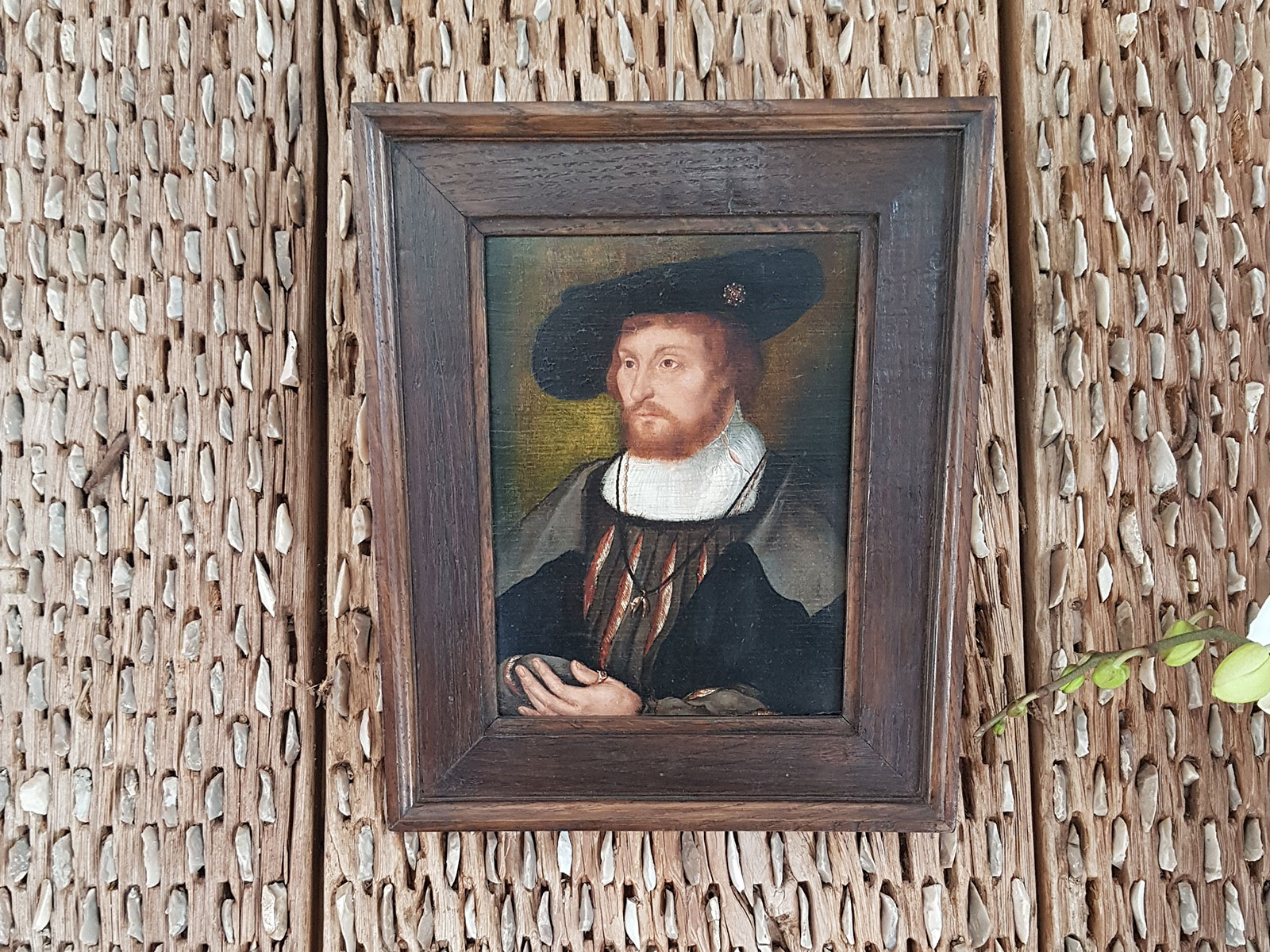 The IOMR proposes “revenir à nos moutons”, to the classical parameters of the great eternal Masters when they give an opinion on contemporary works and artists, searching for common grounds and where one can link with those whom we consider the points of reference in the history of Art, with the purpose of counteracting the present tendency of banalising Art, that anything is worthwhile, and, on the contrary, of raising up the category of Art, but not to influence its creative process, which must, above all, be free and intuitive, but to give a critical, personal and totally partial opinion of the Present Artistic World.
An opinion which may hopefully favour the discovery of this Genius who, we have just said, wanders freely on his own, or of those works which have been ignored or not sufficiently valued and which due to being imbued with the lustre of the past, perhaps for just that reason, have today been laid aside. For this purpose the IOMR counts on the inestimable collaboration of Veronica Lasa, who is herself a painter and a Bachelor of Fine Arts and contributes to the project the fresh sap, and, in a way, the Alter Ego that this project requires with its interest focused on the daily needs of contemporary art, that is to say, first-hand knowledge of the world today, a world full of labyrinths, spirituality, anxiety and much more else, which confuses us with its variety, with its kaleidoscopic nature; she contributes also her vision as a creative and experienced artist in the Art of the New Millennium.