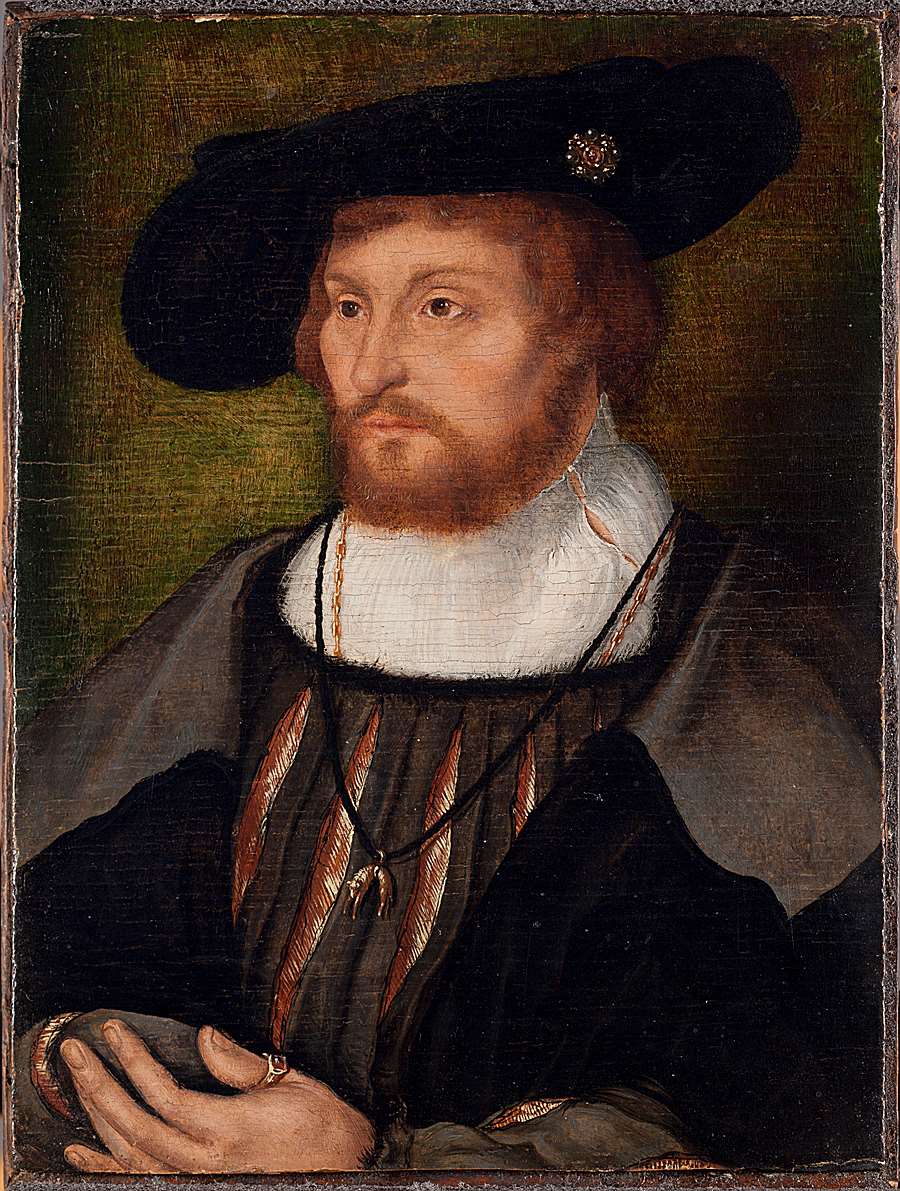 Portrait of Christian II of Denmark

To know more about this discovery, you can read the following book by M. Leeflang
ENQUIRE ABOUT THIS WORK

This intriguing portrait of King Christian II has been recently discovered by Micha Leeflang and fully attributed as an autograph work by Joos Van Cleve. According to Micha Leeflang, it is one of the portraits made of the king during his trip to the Low Countries in 1521.

We know from Durer’s diary that the king, whom he calls “Nero of the north”, was at the time in Antwerp and that he drew a portrait of him, which we now conserve. The king was so pleased with it that he asked to accompany him to Brussels and render another portrait in oil painting which now unfortunately has been lost. It is then when the king must have known Bernard Van Orley who did another portrait of him. (it could be the portrait attributed to Van Orley in the Lázaro Galdiano Museum of Madrid). We are also aware that Quentin Metsys, generally recognized as the most distinguished painter of Antwerp, also painted a portrait of the king in Antwerp. Joos Van Cleve, at the time, was Dean of the guild of painters of the city and, therefore, a person of great prestige who logically could have painted another portrait of the king which is precisely the one we are now studying. (All these portraits, as well as the one painted by Cranach in Wuttemberg,1523, have been exhibited all together for the first time in the National Museum of Copenhagen in July 2017).

1521 is the year that marks a change in the life of Christian II. On the one hand he makes a journey to the Low Countries receiving mass honours as the king who unified the kingdoms of Denmark, Norway and Sweden; the King who was able to limit the power of the aristocrats and the Church, creating the basis of a modern state, with civil statutes and a system of education which would favour the rise of the middle classes; and on the other hand 1521 marks the beginning of his decline which coincides with his gradual conversion to the evangelical religion of Luther who first lodged him in Wutemberg in 1523 when he was in exile as a result of being dethroned by the aristocrats and bishops on his return from his celebrated journey. (he was also portrayed by Cranach in Wutemberg). For this reason we cannot discard the possibility that this portrait was painted in 1523 when the king was received as a guest in Malines by Margarita, sister of Charles V and Governor of the Low Countries. Furthermore, in this portrait Christian II appears with the Golden Fleece granted by Charles V in 1519 due to his marriage to Isabel, Charles V sister. 1521 was scientifically confirmed as a possible date of execution of the painting by the dedonchronological analysis of the panel which establishes 1504 as the year from which the picture could have been painted and acting as terminus post quem. All these estimations converge in dating the picture with absolute certainty, based on historical, stylistic and scientific reasons, in 1521 or a few years later.

The autograph character of the picture, in accordance with Micha Leeflang’s opinion, expressed in his book “Joos Van Cleve: A sixteenth- century Antwerp Artist & his Workshop” 2015 is based on the following considerations:
_ The technique so fluid, characteristic of a painting depicted from life, full of transparencies and with the outlines blurred, though without attaining the typical “sfumato” of his later years, makes possible to ascribe this work to the early years of the 1520 decade, approximately contemporary with his supposed self portrait in the Thyssen Museum; it would be temporarily placed between the pair of portraits of the Kassell Staalichen Gemaldegalerie, one of which is dated 1525 and the other 1526, and the small individual portrait of Stephano Reggio painted between 1516 and 1520.

_ In 1520-1523 Joos Van Cleve, though already widely recognized, did not have a big workshop. In fact only one assistant, Nicholas of Bruges, entered in1515 and in 1522 he contracted another one when he becomes independent. Van Cleve takes on three more assistants in 1535 when he extends his workshop to satisfy increasing demand on his return from his journey to France though maintaining his standard of quality.

There is something in this portrait which is in some measure the quintessence of the Flemish portrait of this period: its capacity for transmitting the personality or even more the mood of the person portrayed, situating him in a confined space where the hands scarcely appear. This allows the painter to concentrate all his strength in the expression of the personage attaining great psychological depth. In this portrait of Christian II, Joos Van Cleve shows us a man sunk in a profound melancholy, a state so characteristic of the Renaissance, a self absorption which prevents action and leads men to paralysis and frustration. Christian II does not appear a tyrannical and cruel king as painted by Sittow on the occasion of his marriage to Isabel in 1514, capable of ordering the murder of 80 aristocrats in Stockholm one day after his crowning in 1520 , nor an astute personage as drawn by Albert Dürer during his stay in Antwerp, nor the determined king as shown by Cranach when he was obsessed to reconquer his kingdom in 1523, but just the contrary, a hesitant person, hostage of his own doubts due to his contradictions: a dictator though lover of the common people, a man of action but paralyzed by his own transcendental reflections and personal fears. In short, a man who feels the weakness of his human nature, who lives in a permanent contradiction to his religious convictions which make him aware of the enormity of his actions and his fear of God ‘s reaction. A man who always believed that both his origin and his cruel destiny, which appear foreshadowed in this portrait, were the consequence of a divine order. For this reason his changeable, schizophrenic character, comparable to Nero’s almost mythical legend, has been so closely studied and probably could have even inspired several generations later, Hamlet, the Shakespearean hero, prince of Denmark, possessed by an obsessive existential doubt and a sense of tragic destiny. Anyhow Joos Van Cleve, in my opinion, more than any other painter was able to capture this extremely contradictory and fascinating psyche of the king in this intriguing picture

Joos Van Cleve more than anybody was able to capture in this picture, has been so closely studied.

- Published in the monography of this painter done by Micha Leeflang "Joos van Cleve a sixteenth century Antwerp painter and his workshop" as an autograph work (2015 Brepols Publishers pages 175,176,182,183 illus. 4.10 pag 176.
- Published in the catalogue of the exhibition at the SMK Museum of Copenhagen regarding Christian II, King of Denmark, as by Joos Van Cleve.

- Published in the catalogue of the exhibition " Pictures and Power, The Visual Politics of Christian II " edited by Hanne Koling Poulsen with contribution by Lars Bisgaard. Statens Museum for Kunst and Royal Collection of Graffic Art. 2017 cat n 14 ilust pag 33; catalogue of portaits of Christian II cat 24 pag 87 as by Joos Van Cleve.

- Exhibited in the exhibition held in the Catharinjekovent at Utrecht "Joos Van Cleve and his workshop" October 2015- September 2016, as by Joos Van Cleve.

-Exhibited at the National Gallery of Denmark (SMK) in the exhibition "Pictures and power - The Visual Politics of Christian II " June - September 2017 curated by Hanne Koling Poulsen. There, it has be shown as a portrait by Joos Van Cleve next to the other existing autograph portraits of Christian II made by Sittows, Durer, Cranach, Quentin Metsis and Bernard Van Orley.