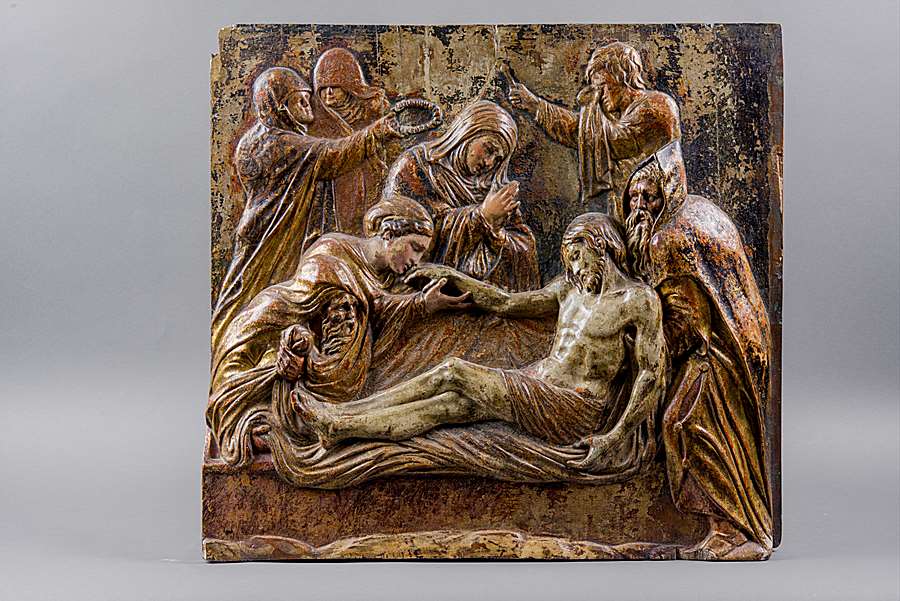 
Essay
1. Book “Treasures of Spanish Renaissance Sculpture, The origin of the Spanish Manner“
ENQUIRE ABOUT THIS WORK

This relief is a work of high technical quality due to the perfect finishing off  of its carving in spite of the small dimensions of the work. It represents the moment when José de Arimatea and Nicodemo are about to place the dead body of Christ in the sarcophagus. Magdalen kisses fervently the Saviour’s hand while behind her Our Lady clasps her hands and bows her head with a gesture of controlled suffering. Further in the background is San Juan who carries in his right hand a nail, while he wipes his tears with the cloak he is carrying in his left hand. On the other side, María Salomé and María Cleofás, wrapped up in their robes, press tightly against each other while one of them carries the crown of thorns.

The composition of the relief is achieved by a balanced arrangement of masses, as the figures are situated around a symmetrical axis which stresses the central position of Our Lady, though, at the same time, the movement of the folds creates a curved whirl linking some figures with others, even making them overlap, as observed in the cloak covering the head of the holy man on the left as well as Magdalen’s shoulder. These two masculine figures are represented with exaggerated postures and have fiercely expressive faces with long flowing and twisting beards. Their faces are tormented and pathetic. Jesus’ anatomy is carved correctly throughout but with more elongated limbs than was the norm according to the mannerist canon; the same tendency was observed in his crossed long legs. His head is serene and the sculptor does not show us signs of violence, except for the drops of blood on his neck. This is a very Italianate interpretation, this vision of death as a person tranquilly sleeping. In the relief there is a clear reference to Berruguete’s style, specially in Nicodemo’s and José de Arimatea’s faces, as well as in the circular wrapping movement of the robes. But there is also aloof elegance in the gestures and in the movement of the composition which leads us to approach the development of his school in the mid-XVIth century towards a more elegant art, related to the Transfiguration in the upper choir-stalls of Toledo cathedral and the later sepulchre of Cardinal Tavera. This is the evolution which is observed in the Masters of Ávila-Toledo, such as Juan Bautista Vázquez el Viejo, Isidro Villoldo, or Francisco Giralte and Manuel Álvarez from Palencia.

Manuel Alvarez is precisely the one whose work is most closely related to Berruguete’s. When he was young he collaborated as assistant in the Toledan choir-stalls where he worked thanks to Giralte who later became his brother-in-law when he married Giralte’s sister. The women who appear in the background of our relief remind us of Giraltesque models, but they do not present us with a sense of voluminous masses in the style of this sculptor. On the contrary, constant examples of habitual aspects do appear in Manuel Alvarez’ initial phase. We must bear in mind that this sculptor had before him a long life during which he could evolve throughout his whole production, from an elegant and refined mannerism of Berruguetesque origin, of close contact with Masters of the Toledan centre, such as Juan Bautista Vázquez, in a period lasting approximately until 1563, when he received the influence of Juan de Juni and Gaspar Becerra, which would gradually increase in strength up to his final works.

Thus the figures of Our Lady and also the two women situated behind closely approach the human types and system of robes of the relief of Santa Clara and her nuns in the sepulchre of Don Alonso de Rojas in the cathedral of Toledo. (Margarita Estella observes his autograph work in this relief and similarly in the human types of the holy men who closely approach the biblical personage in the Lázaro Galdiano Museum (also attributed to Álvarez by Estella). There are also close relations with various works undertaken by the sculptor in the bishopric of Palencia during the first period of his activity.

The human types represented by the two holy men appear like the Moses and Elías in the Transfiguration group of the façade of the church of El Salvador in Valladolid. There appear the same movement of folds in the robes and the expressive heads with flowing and twisting beards. Even the figure of the Saviour is similar to that of Jesus in this Burial, but with the difference of representing a live body wrapped in robes, not a nude, dead body. Other similar types appear in numerous works by Álvarez belonging to this period, such as the Eternal Father from the scenes of Genesis on the bench of the altar-piece of Arrabal de Portillo, San Jerónimo, David, Salomón and San Gregorio of the altar-piece of Quintanilla de Onésimo, all of which also have in common the undulating movement of the folds. Or the Simeón of the Presentation in the Temple in the altar-piece at Santoyo. The same forceful expressivity of his head is evident in a San Pablo carved in alabaster, in the collegiate church of Villagarcía de Campos (Valladolid), proceeding from the principal altar-piece of the monastery of Santa Espina, whose reliefs are now in the Marés Museum.

The human type of San Juan is also used by Álvarez in his autograph works. Magdalen`s gesture kissing Jesus’ hand appears in other reliefs on the same subject by the sculptor, though they may be dated after 1563, as, for instance, the alabaster relief which comes from Castromocho (Palencia), today in the Diocesan Museum of Palencia, or the altar-piece proceeding from Berceruelo, today in the church of Nuestra Señora del Rosario in Valladolid.
Women also are related to a relief on the same subject as Christ’s Burial in the National Museum of Sculpture in Valladolid which is attributed to Francisco Giralte, though, in my opinion, it is rather a work by Manuel Álvarez.

After considering all these connections, I think that the work we are studying belongs to the sculptor’s first period, which coincides with the dates indicated, and even that one cannot exclude that the relief was made in Toledo where there is documentary evidence of his activity in the  decade of the 1550’s around the sepulchre of Cardinal Tavera in 1552 and afterwards in 1555, when he seeks the post of overseer (aparejador) of the cathedral and makes the models of the candlesticks for the infante.