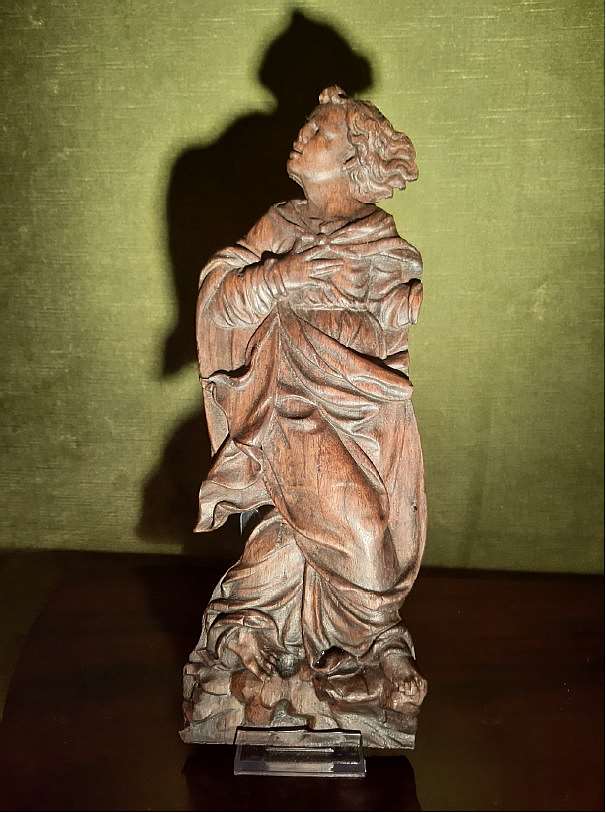 This sculpture represents without doubt an image of Saint John the Evangelist and is part of a Calvary. It is indicated by the position of the figure, with its face turning towards the right and its head, slightly raised, looking at the crucifix which has disappeared. As habitual in christian iconography, Saint John is situated on the right side (Epistle side), as Our Lady is situated on the left side (Gospel side). (1)

It is, strictly speaking, a relief since it shows the surface of the slab from which it has been carved. This fact and the slight height of the work allow us to assume that the original Calvary would have been placed in a small box, as is habitual in devotional altarpieces situated in sacristies, or private oratories and dwellings during the XVIth century.

In spite of its small size, the shape of the relief is well carved which indicates that it is not a piece made by a craftsman, but the result of a fine work carved by a sculptor. Without any doubt it can be assigned to the sculptor Juan de Angés the Elder of the school of León, active in the second quarter of the XVIth century. In this work-shop the French masters who arrived in León through the Road of Santiago were outstanding, among them Juan de Angés the Elder, the “entallador” Guillén Doncel and, above all, Juan de Juní.

They all collaborated in some of the works, specially in the façade and the choir-stalls of San Marcos of León (2) where the individuality of each of the sculptors is hidden as they show common characteristics in the latter works. In her study of the choir-stalls, (La Sillería coral del convento de San Marcos de León, León 1997), Arantzazu Oricheta García has tried to differentiate Angés’ work in these choir-stalls, indicating that his style is greatly influenced by Juní, although the former shows less vitality and drama. It is precisely the attribution to Angés of a relief of San Lucas (3) in the Leonese work which permits us to link it with the kind of drapery folds and the head in the relief of Saint John the Evangelist we are now studying and later propose to demonstrate.

Our Saint John is a work that has all the characteristics of the mannerism of Leonese sculpture which, although it adopts Italian influences, has a French stylistic base, of Burgundian origin, as opposed to Alonso Berruguete’s intellectual mannerism in Italian style. This gives rise to a more naturalistic concept of the human canon, with amply massive figures emphasized by thick drapes wrapping round figures in rhythmical movement.

In our Saint John we see clearly these components. First of all, posture is so exaggerated as to appear unreal, as we observe in the distortedly crossed legs, and the body and head turning in opposite directions. The clothes seem to be alive, particularly the cloak which wraps around the body with clinging frenzy and lets us catch a glimpse of a forward stepping leg.

Although the sculpture is carved on a small scale, we observe very precise work in the rendering of the surfaces of the materials, with their varied folds. We clearly see close artistic relationship between these folds and the full-length bodies on the high backs of the choir-stalls of San Marcos de León.

There is a certain idealization in the representation of the face which shows a restrained dramatism. Yet, a pathetic look is reflected in her appearance with loose locks and wavy wisps of tousled hair blown about by the wind. This kind of hair appears in the above quoted San Lucas (2) of the choir-stalls of León, and also in the figures of San Miguel and San Roque on the doors of the cloister in the cathedral of León (3), attributed to the “entallador” Guillén Doncel regarding assembly of pieces and to Juan de Angés the Elder regarding the carving of the images.

Today we know that the choir-stalls were begun around 1533 and were finished in 1543, although the Prior’s monumental Chair was still being paid in 1544. Regarding the cloister doors of the cathedral, they are dated 1538. Therefore the work we are studying must be given these dates in view of the similarities analized, and we can establish 1540 as a pivot date around which activity could approximately turn.