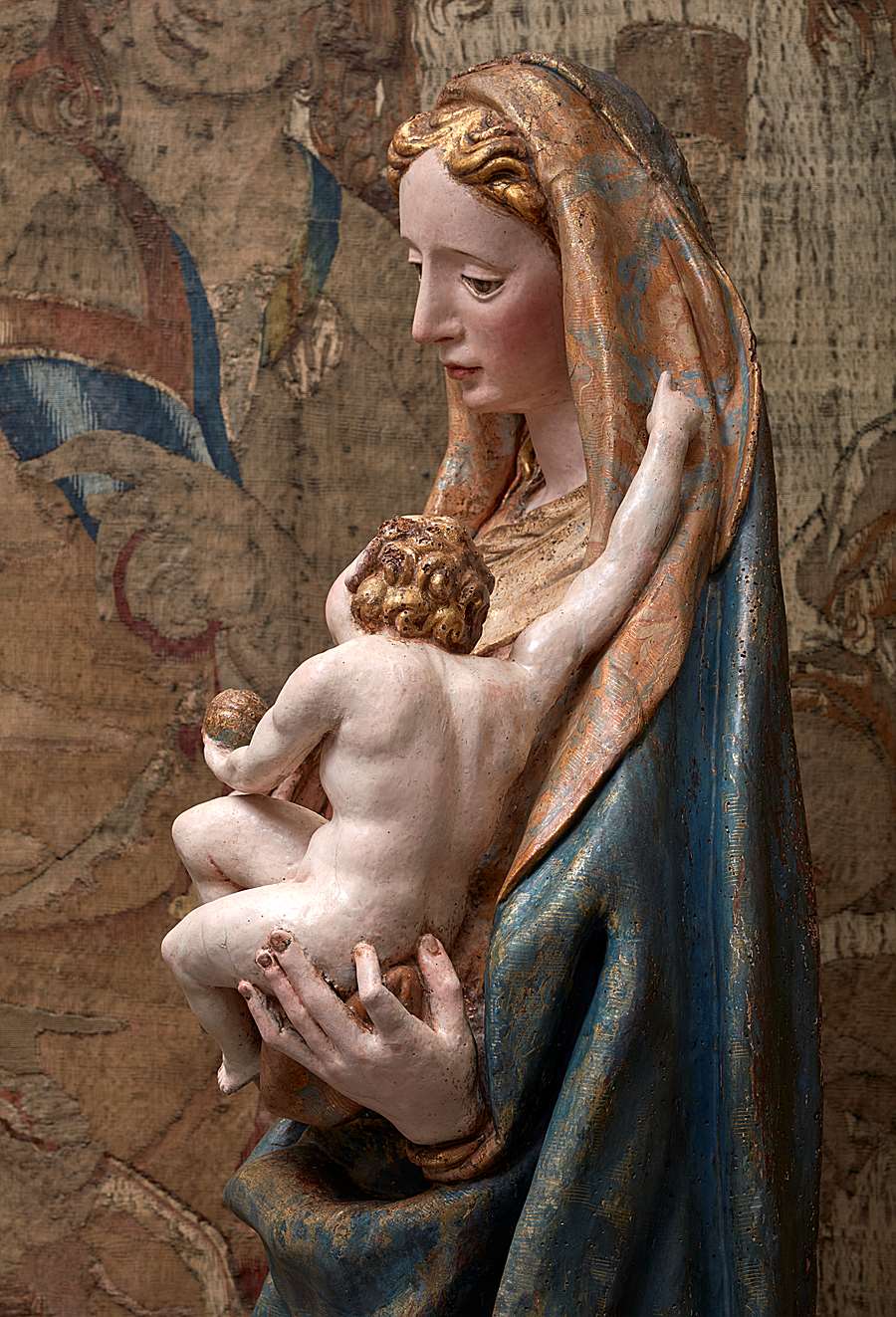 Our Lady and the Child Jesus

The sculpture representing "Our Lady with the Child Jesus" we are now studying, an autograph work by Juan Bautista Vázquez the Elder, is a magnificent example of the level of refinement attained by Spanish Art in mid XVIth century and specially by the later Renaissance style which flourishes in Sevilla from the 1550’s onwards, due to the emigration of Toledan artists trained in the Avila school and stamped with the genius of Alonso Berruguete.

Juan Bautista Vazquez the Elder is the most purely Italianate artist of the Spanish XVIth century whose work originates, and not by chance, in the technical acuity of the Avila School, initiated by the great artist who introduced the Italian Renaissance in Spain, Vasco de Zarza, and was followed by Isidro de Villoldo, the most outstanding student of Alonso Berruguete. Though, however, we know , according to Margarita Estella,  that Juan Bautista Vázquez the Elder was born at Pelayos, in the province of Avila, in around 1525 , we lack information regarding his training since his work during this period is not documented. No doubt the magnificent replica of the “Pietà” by Michelangelo which is in the chapel of Nuestra Señora la Blanca, in Avila Cathedral, gives us an idea of his art. As indicated by Margarita Estella, this work is greater than other copies made by Baggio di Biggio and by Montorsoli, although its attribution is only based on similarities in his Toledan work, infused with Italian calmness. This absense of información regarding his early years, apart from having further documented work corresponding to 1554 of great technical ability, confirmed by the fact that Juan Bautista Vazquez the Elder was treated at this time in Toledo as an independent Master., induces us to think that on some previous occasion he must have travelled to Italy, as vouched in the reference found by Margarita Estella in the Encyclopaedia of Artists by Zani (published in Parma in 1820). In this book he is mentioned as an engraver “a bulino” in Parma. His duly analysed capacity to carve marble together with his fluent technique in drawing in a deep Florentine style , as manifested in his splendid preparatory design for the "Pórtico de las doncellas” and his well known engravings, confirm his almost certain journey to Italy before his stay in Toledo.

We thus find ourselves in the mid 1550’s with an already technically mature artist who is able to sign a contract of collaboration with a recognized Toledan sculptor, Nicolás Vergara el Viejo. His first documented work, the altar-piece of "La Concepción de Almonacid de Zorita " made in 1554, whose “Virgen de la Paz” carved close to the style of Giacopo Sansovino and the Parma school, demonstrates better than anything else an artistic personality totally formed and captivated by Italian shapes in all their splendour; a sculptor with a firm intellect able to confront on an equal footing the individuality of Alonso Berruguete, who is paradoxically his other great influence and who after the death of Felipe Bigarni and his son, Gregorio Pardo, dominate Toledo 's artistic world. We find proof of this influence already in 1554 in the sculpture group “El Abrazo delante la puerta Dorada”, also in the " Almonacid de Zorita altar-piece which has evident analogies with the group of the “Visitation” in the altar-piece of the Saint Ursula convent by Alonso Berruguete (1546) and in his probable collaboration in the execution of the sepulchre of Cardinal Tavera (1554-1556) when Berruguete encounters difficulty in carving marble due to his old age and is in fact at the moment of his death in 1561. This close collaboration was defended by almost all the scholars since Manuel Gomez Moreno firmly maintained it in his book “The Spanish Renaissance”, although Manuel Arias at present denies this hypothesis in his book "Alonso Berruguete. Prometeo de la escultura”.*

As a result of this fortunate interaction between these influences, an absolutely exceptional and autonomous "Corpus" of sculptures will arise in the Hispanic world full of a typically Parmigianesque Mannerism which marks a turning point in the decline of the prevailing influence wielded by Alonso Berruguete towards the triumph of the purest Italian artistic rules which already begins to be developed under romanistic forms in "Castilla" by Gaspar Becerra, and will not delay in appearing, with Anchieta, in the "Vasco Navarro Aragonesa" zone, although following a style much closer to Michelangelo.

The use of the most pure refined sculptural technique combined with designs which bear the stamp of the depth of feeling derived from the influence of Alonso Berruguete, all this contributes to form a Master sculptor who is endowed with the greatest capacity to render woman’s beauty in the sublime expression of his deeply melancholic Madonnas. In 1557, after his journey to Sevilla, Juan Bautista Vázquez continues working on the sculptures of the Cartuja de las Cuevas which were unfinished due to the death of Isidro de Villoldo (1556). This artistic achievement would open for him the doors to a very successful career as sculptor which would mould the canon of the Andalusian madonna image and raise him up as the patriarch of the School of Sevilla, preceding directly to the great Martinez Montañés.

The work we are now studying is of special interest as it represents the fusion of these two influences. On the one hand, it shows the striking Italian artistic personality of Juan Bautista Vázquez’ carving, on the other, there is the clearly Berruguete stamp. Indeed, the softness and simplicity of the design of the folds which hang down heavily in their fall, the subtle “contraposto” of their position, the majestic stance of Our Lady who appears like a Roman matron, with her large, rather rough hands, her broad face, straight nose and thin limps, all supremely typical features rendered by J. Bautista Vázquez, as we observe in other undoubtedly autograph works of his, such as the “Virgen de las Fiebres, La Virgen del Fascitol of the Cathedral of Sevilla and the reliefs of the parish of Sta. Maria di Carmona (1563) and San Mateo di Lucena (1572), all of them documented; nevertheless, we cannot fail to be surprised by the delicate tenderness expressed by Our Lady in her intimate communication with the Infant Jesus lying submissively in her arms and by the tremendously mannerist gesture and disproportionate muscles very similar to the angels surrounding the sepulchre of Cardinal Tavera   and almost identically the same as a drawing by Alonso Berruguete now exhibited in the Academia de San Fernando, Madrid. This Berruguetesque aura is not so easily and obviously discernible in J.B. Vázquez’ work, above all in his feminine personages who are rendered in a totally Italianate style which avoids strong human expressivity in its models in favour of a more divine appearance.

For this reason, Prof. Jesús María Parrado suggests that the work must have been effected at a time close to the conclusion of the Sepulchre of Cardinal Tavera at the beginning of his stay in Sevilla during the 1560s because, though it contains these fully Berruguetesque touches, it responds faithfully to the typology of the Sevillian Madonnas which J. Bautista Vázquez has created. Furthermore, Prof. Parrado del Olmo has deeply studied the analogies of this newly discovered work with one of the most outstanding and well known Masterpieces of the Sevillian Renaissance: the "Giraldillo ", the Bronze statue which crowns the Giralda; a sculpture executed by Juan Bautista Vázquez the Elder, based on a design by the italianate Sevillian painter, Luis de Vargas, moulded in bronze in 1568 by the most important Sevillian XVI century bronzesmith, Bartolomé Morel.

Margarita Estella declares that there exist analogies between our sculpture and the relief of the Epiphany and the Annunciation in the Church of San Mateo di Lucena (1572) due to the similarity in the facial physiognomy of Our Lady, her straight nose and small lips, specially when observed in profile, just as she is revealed in the relief of Lucena; and the details of the folds of the garments also follow a similar design. However, the Berruguetesque halo over Our Lady’s expression and the even more evident stylistic and corporal correspondences with the Madonna of Fascitol in Sevilla Cathedral, for whose payment to Juan Bautista Vázquez there are documental records in 1565; all this evidence coincides with Prof. Parrado’s opinion that around 1560 is the most probable date of its execution.

The polichromy which accompanies the sculpture has a subtle elegance both in its harmonious designs of branches contained in a balanced composition and in her soft-toned rather sugar plum colouring, which is closely in accordance with what was done in Sevilla at the end of the XVIth century. Its “estofado” and “esgrafiados”, though lavishly rich, do not seek to captivate us, nor impress the spectator, but rather to induce a deeper understanding of the sculpture as a whole. The flesh work, however, specially that on Our Lady’s face, carried out with an exquisite polishing technique, contributes something absolutely essential to the work as it enhances her beauty and feminine nature as well as it gives her an expression in which poignancy blends with being sunk in a reverie and gives a premonitory sign to the scene.

We are grateful for the studies carried out by Jesús María Parrado del Olmo and Margarita Estella which confirm in their respective cataloguing cards the attribution to Juan Bautista Vázquez of this work and its date around 1560 after having examined the piece in the original.