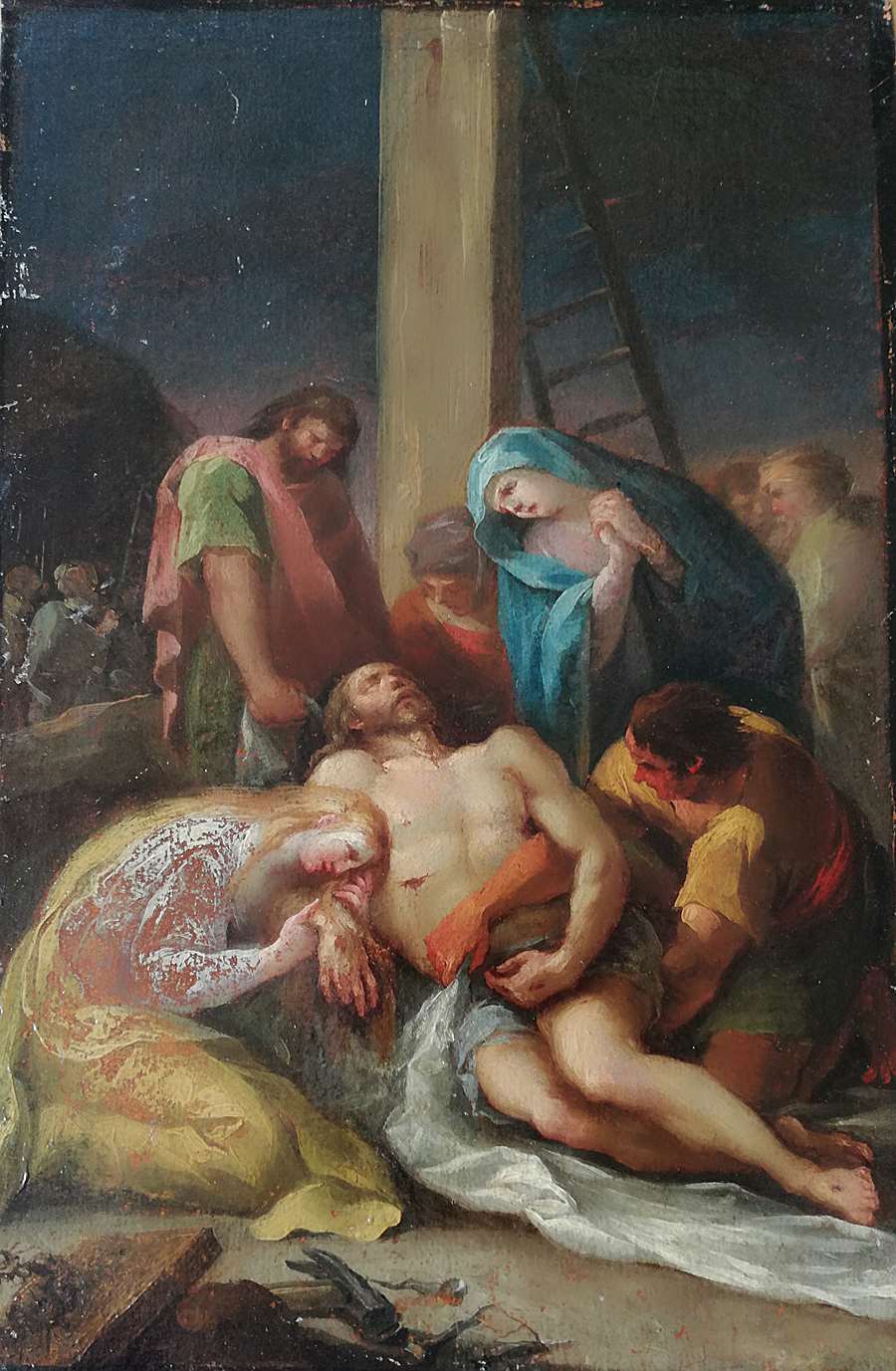 The IOMR has made a comparative study of the painting in which we point out its stylistic analogies with other works by Goya:

The immediacy and reality with which the painter treats the scene so that one may feel it close to life and real, where the artist reveals the human pathos of death with no conventional mannerisms, excluding figures of the celestial world, such as angels, which might confuse his pure sense of reality so that what first surprises one in the picture and what, in fact, makes it closer to Goya and therefore reminds one of the engraving, Desastre Nº 26 No se puede mirar and Nº 14 of the same series, Duro es el paso in which Goya treats death with a completely contemporary closeness.

The sensation of vigour, dynamism and natural movement shown by Saint John, the assistant who covers Christ with a shroud, is dressed according to modern times and reminds us of so many peasants in the tapestry cartoons and the series of engravings and of whom we only find precedence in the spontaneity of some of the lads of Luca Giordano. All these figures are in contrast to the monumental strength of the soldier or apostol, who stands immobile behind Christ; this figure presents certain similarities to the ones painted in the frescoes of the Church of the Cartuja Aula Dei and to certain classical sources, probably inspired in the Hercules of Farnesio; the hieratical character of the torso and neck of the recumbent Christ, free of any mannerism, representing death simply as it is, with scanty concessions to any conventionalisms typical of Corrado Giacchinto’s style, and whose dead countenance slightly set in relief by light is so typically goyesque that it reminds me of the picture of the etching Agarrotado (1778) and the moribund person in the picture San Francisco de Borja y el moribundo impenitente (1788); such a work as this, full of changes of rhythm and dramatic movement, typical of Beethoven 's symphonies, we do not find in other painters of Goya’s period, least of all amongst those of Zaragoza totally influenced by the Rococo movement and Italian Classicism and yet, we decidedly perceive it in Goya’s paintings in all its epochs when he endows his work with this lively spirit which makes him the best documentalist of his time and even a forerunner of the cinema.

The creation of a sense of space , fostered by the fusion and interaction of resources perfectly integrated in a work of such small dimensions presupposes to some extent a technical feat which does not save it from certain errors which are also typically Goyesque and characteristic of an artistic spirit not yet mature. This question is perhaps that which most facilitates the comparison of our picture with his work during the years 1771-1773, such as Anibal, Santa Bárbara, the frescoes of the Cartuja de Aula Dei and the recently discovered Huida a Egipto . On the one hand, the holy men, so correctly diffused and subtly illuminated with an inner glow which seems to spread out from the background at the right, with a halo which is more akin to Tiepolo than to Giacchinto and certainly similar to the figures which appear under an archway at the left of the Desposorios de la Virgen at the Cartuja Aula Dei, (1774); furthermore, in the background, to the left, some soldiers who are merely sketched, render a sense of distance to the scene; these figures are given importance in a marvellous way by a feature which Goya frequently uses, marking them out with a pale line as in the sketches of Aníbal (1771) and in the Santa Bárbara(1772) which surprise us. On the other hand, the recumbent Christ, placed in an almost foreshortened position, and represented with a tomb-like rigidity, appears natural and very different from the mannerist code which ruled the artistic circles which Goya frequented and which only in the way he would cross his legs, there could be perceived a certain mannerism of classical sources, or even derived from Bernini (Cupid and Psyche). All this, as Goya does in his engravings, giving priority to the foreground, as well as imbueing a sense of reality and immediacy which is so inherent in Goya’s painting and whose closest precedent can only be found, perhaps, in Tiepolo. The composition is the result of a great technical originality following what Goya himself said in his brief autobiography, written in Bordeaux, that in his youth, after copying the Masters and the models of Luzan, he let himself be led by creativity.

The combination of a light which rises up within the picture towards the exterior, out of that deep darkness already so characteristic of Goya in the seventies on his return from Italy, created by certain transparencies painted in oil over the reddish imprimatura in harmony with the flashes of another vertical light overhead which is separate from the rest of the scene and which falls on the Cross and above all on Christ, specially on his lifeless features and on the brutal spasm of his body, such as only Goya would do; all this is what definitely gives the sense of drama to the picture and is our touchstone when we study the authorship of the work.

The colour palette is an essential element of the picture, as long as it does not correspond to the cold, mother-of-pearl tone dominating the rococo Giacchintoesque style, followed faithfully by José Castillo, the Bayeu, the Gonzalez Velázquez and Maella, on the contrary, it is dominated by a range of warm colours much closer to Luca Giordano and to late Baroque Neapolitan painting. In this work earth-coloured tones can be appreciated under a greyish nocturnal sky, which is partially lightened by streaks of blue. Both these tones blend with the reddish imprimatura that surges up from the canvas, (This effect would be strengthened by an opportune cleaning of the picture), favouring the funereal atmosphere and setting corresponding to the Lamentation on the Death of Christ. What, however, really captures the attention of the viewer is the contrast between the typically Giordanesque yellow and blue of the cloaks of Mary Magdalene and Our Lady which stand out all the more thanks to the red touch of Sr. John’s sash, creating a special foreground view which gives this particular goyesque closeness and scenographic sense.

From a technical point of view the way he illuminates the salient pleats of clothes so as to draw attention to them, alternating real chains of light with hollow shades, giving the composition the monumental grandeur which we always appreciate in any work by Goya. Finally, the special bravura when he treats with only four brushstrokes St. John’s red sash reminds me of the one he painted in the full-length portraits of the Duchess of Alba years later.

All this makes us believe that we are facing the work of a genius, not of a mere follower of Italian rules, but rather of someone intent on creating the reality of a scene, just as he would have seen it if he had been present like a privileged spectator. In this sense Goya was doubtless a forerunner and this picture, if its dating is confirmed, would be the first in which Goya shows his authentic artistic individuality, marking his distance from not only his Masters Luzan and Bayeu, but also from Corrado Giaquinto and even Tiepolo, surpassing them all in originality and modernity.

According to Gudiol its historical provenance is from a private collection at Fuendetodos.
Simonsen Collection (Brasil) 1966.
Private Collection Paris 1970.
Private Swiss Collection 1986.
Exhibited as a work by Francisco de Goya in the exhibition, Goya (1746-1776) and his surroundings. Zaragoza 1986.