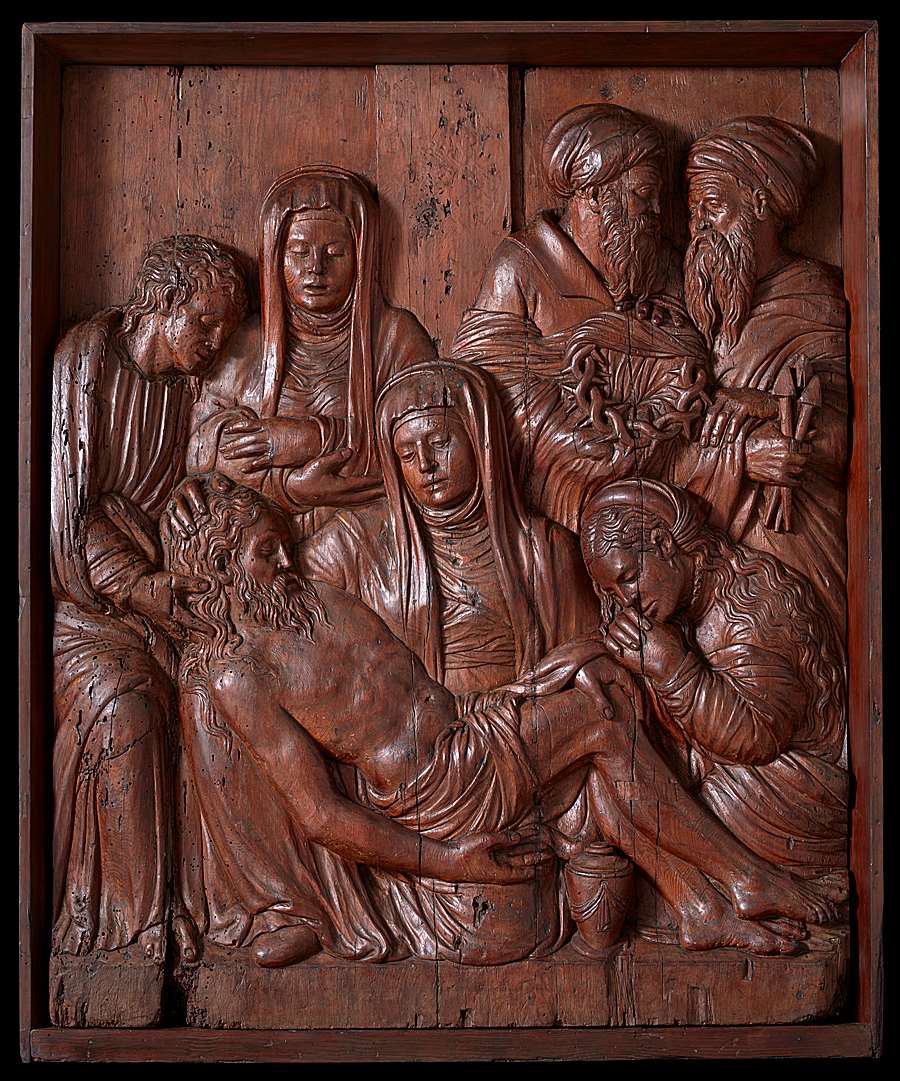 Lamentation over the Dead Christ

Essay
1. Book “Treasures of Spanish Renaissance Sculpture, The origin of the Spanish Manner“

Read blog:  by Carlos Herrero Starkie
ENQUIRE ABOUT THIS WORK

This is a relief work which, although it is unpainted, it is quite probable that it was polychromed because one may still observe tiny remains of priming and quilting on the wood. The work has a well-balanced composition, following closed lines so that all its elements are based on a general serene design, although the subject is dramatic. Thus the centre of the composition is the dead body of Christ, sustained by his mother in her lap, in the manner of a Pietà. In the foreground, on either side, San Juan and Magdalen accompany the scene holding a bowl of perfumes. Behind them is situated María and, on the far right, José de Arimatea and Nicodemo are in conversation and hold the Crown of thorns and the nails. All these figures are interrelated and contribute to create this harmonious and intimate group surrounding the drama of the dead body of Christ.

The work is related to Roque de Balduque’s style. This Flemish Master arrived in Seville when other northern artists came to Spain attracted by the opportunities for work; amongst them are included others originating in the same city of Bois-le-Duc, such as the Boldque family who settled in Medina de Rioseco (Valladolid). Balduque is a hispanization of the original family name. Documents of the period call him Roque de Baldoc, Baldocrín, Balduz, Belduque, Boldoque and Balduque; the latter is the name used by historians of Spanish art when referring to this artist. All this shows how the scribes transcribed the Flemish name according to how it sounded to their ears.

Palomero has indicated that his style is complex and his carving unequal, with frequent changes in style, perhaps due to his having to admit the required collaboration from others so as to be able to finish his numerous commissions. He used engravings by Dürer and Marco Antonio Raimondi, amongst others, to fix his compositions which makes his style owe just as much to its northern provenance as to its Italian origin.

His feminine types are characteristic, as they appear in this relief, with oval heads and typically pleated and wavy headdresses like those used by Balduque in works such as his numerous “Our Lady with the Child Jesus”, or in the group of Santa Ana at Alcalá del Río. In many cases, such as the women’s figures, or in San Juan, he carves the front of the tunics with fine parallel pleats. These are the ones which appear in the aforementioned works or in the feminine figures of the “Holy Burial” of the collegiate church at Osuna. They are also related to the feminine figures in the relief of the Burial of Christ at Chiclana, inspired by an engraving by Raimondi, on a drawing by Rafael.

The figures of the two saintly men in this relief may be compared with others made by Balduque. His interest in characterizing them in the oriental fashion, with turbans, is similar to those in the “Burial of Christ” at Osuna. In the same way their long, thick and fine-haired beards, with central parting, are similar to the types represented in the last mentioned work, or to a few apostles in the “Last Supper” at Arcos de la Frontera, which are similar to the San Juan. Parallelisms are also observed in the heads of a few apostles in the altar-piece of Santa María de Cáceres, initiated in 1547; this work shows more movement which may be due to its being his first documented work or the participation of the sculptor Guillén Ferrant.

The dead Christ of this relief is very elegant. He does not show any signs of martyrdom and appears more asleep than dead. His delicately pleated loincloth closely pressed to his body, his elegant head with fine strands of hair and beard are outstanding. All these epithets point to their relationship with the “Cristo de los mártires” at Santa María de Carmona or to the “Cristo de la Salud” in Córdoba, attributed to Balduque.

We can only add as a colophon the relationship with a relief work “the Embrace” in the Puerta Dorada unduly attributed by Isabel del Río de la Hoz to Francisco Giralte which measures 135 x 114 cms. A visual analysis indicates that it appears to be made from a wood similar to our relief, and that the style of San Joaquín approaches that of the holy men in the relief we are studying. Obviously this is only a hypothesis.