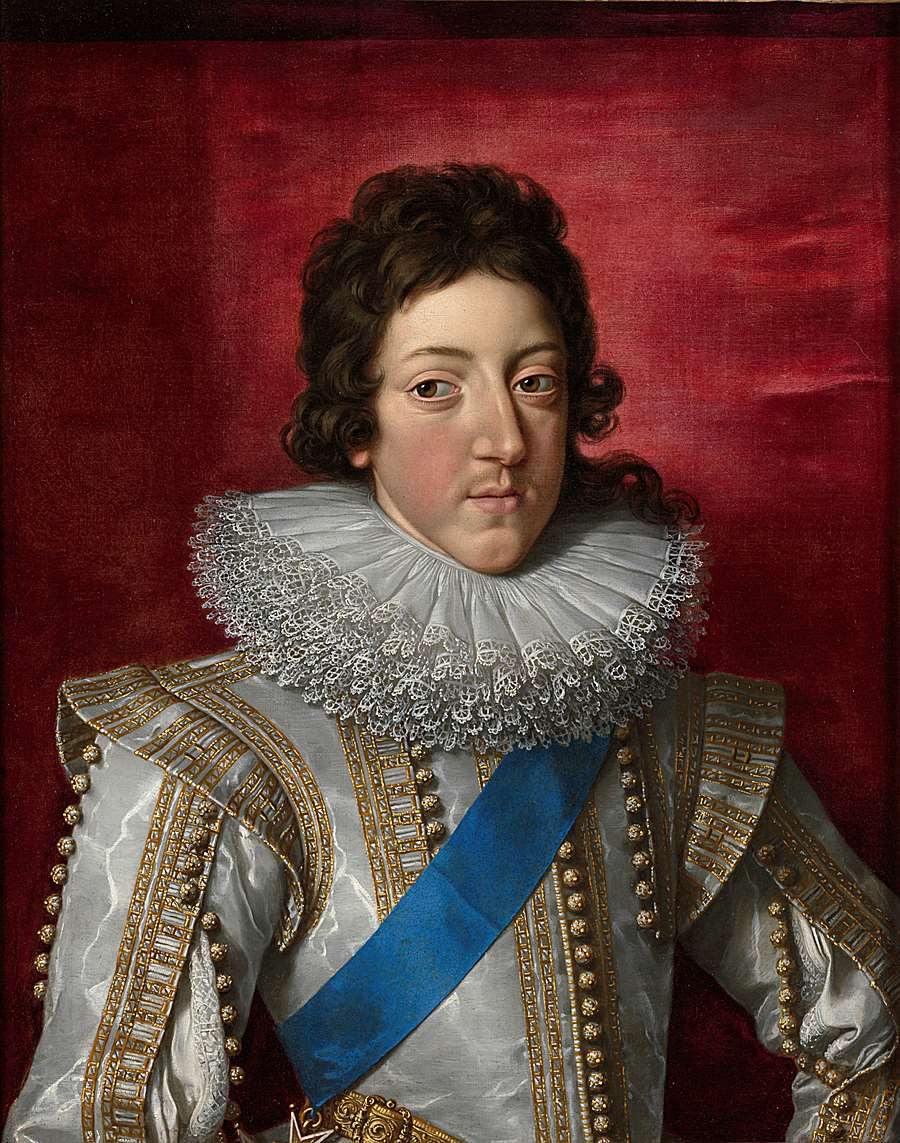 This is the last known portrait of Louis XIII of France by his official court portraitist, Frans Pourbus the Younger before the artist died in 1622. Blaise Ducos has dated the painting to circa 1620, when Louis XIII was nineteen years old.[2] As such, our portrait represents the adolescent King at a pivotal moment in his life – having assumed full regal power, and emerging from the control of his mother, Marie de’ Medici. There is no other known extant representation of the King from this period, and if it were not for the discovery of this portrait in 2011, one would pass from his childhood likenesses by Pourbus to those of the king aged thirty by Philippe de Champaigne, with long hair and a pronounced moustache.[3]

Pourbus portrayed Louis XIII various times during his employ at the French royal court, however the present design is unique, with no other known versions. This can to some extent be explained by the fact that although the artist developed the most important artistic circle of his day, with numerous followers, he nonetheless by choice had practically no workshop.[4] In all his portraits of Louis XIII, Pourbus presents the young royal contrapposto, in a pose that directly mimics the artist’s earlier portraits of Louis’ father, King Henri IV of France (Louvre, inv. 1708). In establishing the young king’s iconography, Pourbus saw the importance of invoking that of the deceased.

Costume was likewise important in presenting his sitter as a sumptuous and grandiose royal icon. He painted the younger Louis in blue or red silk costumes,[5] but from adolescence, as here, he wears white silk with gold embroidery, redolent of his celestial kingly status.[6] In our portrait, Louis wears the prerequisite white silk with rich gold embroidery, but the costume itself is of an entirely new fashion – the doublet is of watered white silk, with multiple ripples and reflections, rather than the ‘slashes’ of his previous doublets. As well as golden embroidery there are additional and manifold gold buttons. Pourbus has relished every detail, from the clustered layers of lace in his newly rounded ruff, to the ironed fold in his blue sash. Although it is a bust-length format, the artist has also included Louis’ badge of the order of Saint Esprit. The young king retains the lovelock that appeared in his portrait of 1617, but here he sports a young man’s nascent moustache, each hair as carefully rendered by Pourbus as the sitter’s eyelashes.

Frans Pourbus the younger was born in Antwerp and naturalized French in 1617. He was undoubtedly the most influential court painter of the late sixteenth and early seventeenth centuries. He developed an extraordinary canon of royal portraiture, and his success was so prodigious that it was only the new artistic approach of Rubens or Van Dyck that would take portraiture in a different direction. His portraits of Louis XIII served as the prototype for the ultimate princely portrait of his day, and were widely disseminated through foreign courts as an instrument and indication of French power. Pourbus had established a style of painting that was recognized throughout the courts of the Hapsburgs, Bourbons or Medici where he worked, and his importance in the French royal court was attested by the honour of taking up residence at the Louvre itself.[7] He sought to both faithfully render a likeness, whilst also aspiring to an idealism – the ‘royal dignitas’ which singles out his work. He endeavoured to represent above all the status and character of the sitter through a set of attitudes, gestures, looks and the sumptuous splendor of their costumes, while the platicity of their flesh, the caredul modelling of their faces and hands, evoke the delicacy of French enamels of this period.

Son of Frans Pourbus the Elder and grandson of Pieter Pourbus, he trained in his grandfather’s studio and was accepted as a master in Antwerp in 1591. During his early years in Antwerp, until circa 1590, Pourbus’ style was strongly influenced by the work of his father and grandfather. Although his style was individualised during the course of his artistic development, he always remained faithful to the Flemish tradition and never embraced the baroque movement. Thus Pourbus earned the appreciation of seventeenth century French classicists, and came to be regarded as a founding father of French portraiture, taking forward the aesthetic established by the likes of François Clouet (c.1510 – 1572). In the 1590s Pourbus worked for the Archdukes Albert and Isabella at their court in Brussels, but departed for Mantua in 1600, where he was appointed court painter to Vincent II Gonzaga, Duke of Mantua until 1609. He received numerous commissions from the ducal family and travelled to Innsbruck in 1603 to depict members of the family, followed by Turin in 1605 – 1606, and Paris in 1613, where he painted the young Louis XIII, then Dauphin, and his mother Marie de’ Medici, the sister of the Duchess of Mantua. Following another trip to Italy in 1607, he returned to Paris where he entered the service of Marie de’ Medici and subsequently that of Louis XIII in 1616, until his death in 1622.

Our painting is believed to have been in the collection of the Dukes of Infantado, Spain, for many generations. The Dukedom of Infantado is, together with Alba, Albuquerque, Medinaceli, Medinasidonia and Fernan Nuñez, one of the six most important Dukedoms in Spain. The family lineage goes back to the 1st Marquis of Santillana, Don Iñigo López de Mendoza (1398 – 1458), whose son Don Diego Hurtado de Mendoza (1415 – 1479) was created 1st Duke of Infantado by the Catholic Kings Ferdinand and Isabella in 1475. Amongst their many family titles, the most distinguished include Dukes of Infantado, Marquises of Santillana, Counts of Manzanares el Real, Dukes of Lerma (until 1844), Princes of Eboli, Marquises of Ariza, Counts of Saldaña, Marquises of Tavara and Admiral of Aragón, making them Grandes de España no less than six times.

The family brought together two of the greatest Spanish historic collections, those of the Dukes of Lerma and the Dukes of Infantado, which were united following the marriage in 1686 of Doña Luisa Mendoza and the 1st Duke of Lerma. The great tradition of collecting within the Infantado line began with the 5th Duke of Infantado, Don Iñigo López de Mendoza y Pimientel (1493 – 1566) who assembled more than five hundred paintings in his palace in Guadalajara. The collection was subsequently enlarged by his descendants to adorn their eight palaces in Madrid, which included those next to the Royal Palace, the old palace of the Dukes of Lerma in the Paseo del Prado, as well as the Cattle of Manzanares el Real and the Palace of Moncloa.

Our portrait may have entered the Osuna collection during the time of Pedro Nuñez Girón y Velasco Guzmán y Tovar, Duke of Osuna (1574 – 1624), who served Philip III as Capitán General and Virrey de los Reinos de Sicilia (1610 – 1616) and Nápoles (1616 – 1620). These last dates coincide with that of our portrait, which significantly is inscribed to the reverse in Italian. Pedro Nuñez Girón de Velasco, known as the Gran Duque de Osuna, was one of the most outstanding personalities in Italy at this time. His relationship with the Duke of Lerma, favourite of Philip III, was very close and extended even to the point of marrying his son and heir, Juan Tellez Girón, to the grand-daughter of the Duke of Lerma and daughter of the Marquis of Uceda. This relationship facilitated his rapid ascent, and later his fall at the time of the Duque de Olivares, due to his being considered a pivotal figure in the circle of the Marqués de Uceda, the greatest enemy of Olivares.


[2] Significantly, the adolescent King appears a few years older than in a portrait dated circa 1617, today in the Jakober Foundation, Majorca, in which he is shown in similar costume but with a single tiered, square laced ruff, see B. Ducos, Frans Pourbus the Younger, op. cit., p. 259, no. P.A. 86. The recent discovery of our portrait also disproves the theory proposed by Hamish Miles that late on the artist fell from grace with Marie de’ Medici, giving up portraiture and resorting to painting religious works towards the end of his career. It now seems clear that Pourbus continued to paint both religious scenes and portraits of the King right up until the time of his death in 1622.
[3] The fire of 1661 in the portrait gallery at the Louvre resulted in the loss of all these portraits, except for that of Marie de Médici, and is undoubtedly the cause of this gap in the royal iconography of Louis XIII.
[4] As a perfectionist, he was known to be an extremely slow painter, confirmed by the many letters from kings and princes urging him to finish their portraits.
[5] See Blaise Ducos, (op. cit.), no. 37, c.1606/07 aged 5 - bust-length in red (? - b&w illustration); nos. 46 & 58, c.1610 aged 9 – bust-length in blue; and no. 50, 1611 aged 10 – full-length in red.
[6] See Blaise Ducos, (op. cit.), no. 66, 1614 aged 13 – bust-length in a simple white silk costume; no. 82, 1616 aged 15 – three-quarter-length in a white slashed costume with gold embroidery; no. 84, c.1616 – bust-length aged 15 in a white slashed costume with gold embroidery; no. 94, c.1616 – bust-length, white slashed, as above, aged 15; no. 86, c.1617, bust-length, white slashed, as above, with a love lock, aged 16
[7] Thieme and Becker, Allgemeines Lexikon der bildenden Künstler, Leipzig: E.A. Seemann 1933, p. 315-319.
[8] Don Iñigo Moreno y Arteaga, Marqués de Laula married Doña Teresa de Borbón, cousin to Don Juan Carlos, King of Spain and great grand-daughter of Alfonso XIII.

Possibly given to Pedro Nuñez Girón y Velasco Guzmán y Tovar, Duke of Osuna (1574 – 1624),(*) then sent to Spain, where it descended in the collection of the Dukes of Infantado for many generations;
Probably Joaquín Arteaga y Echague (1870 – 1947), 17th Duke of Infantado; and by descent to his daughter Doña Teresa de Arteaga, Countess of the Andes; thence by descent to her son Don Iñigo Moreno y Arteaga, Marqués of Laula;
Private collection, Spain.