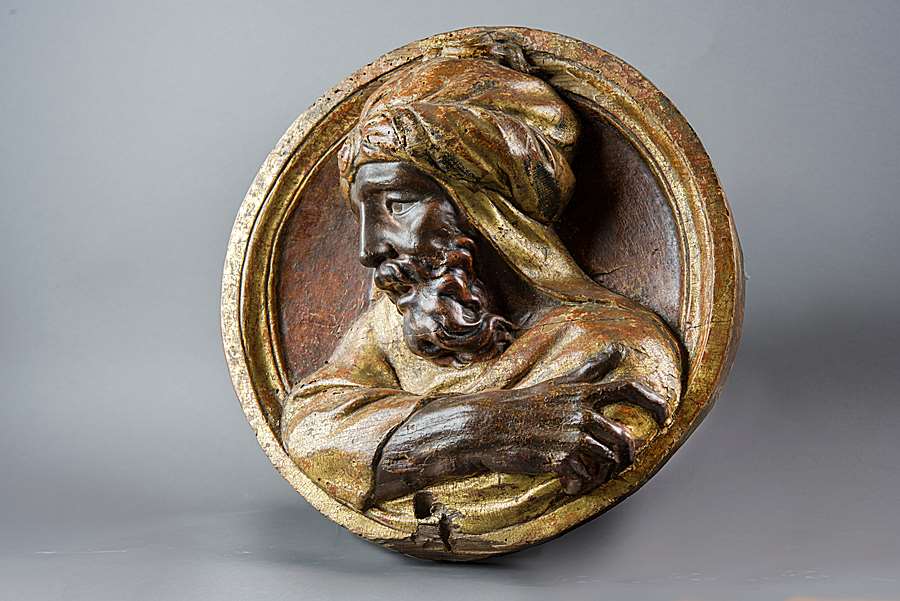 Essay
1. By J.M. Parrado del Olmo
2. Book “Treasures of Spanish Renaissance Sculpture, The origin of the Spanish Manner“
ENQUIRE ABOUT THIS WORK


The “tondo” we are studying represents a prophet with a heartbreaking expression, between longing and resignation, perturbed by a tremendous typically Berruguetesque contortion of his arm. The force that radiates from the relief, obtained through a great simplicity of resources, surprises and leads us to relate it to some design of Alonso Berruguete and at least to the carving one of his most direct and qualified collaborators. Though the possibility that the carving was carried out by the Master’s gouge is assuredly a tempting hypothesis, precisely because of its being so exceptional for such heartbreaking facial expressivity and simplicity of sculptural carving, bearing in mind the importance of Berruguete’s workshop, it is unlikely that it would be dedicated to a simple “tondo”. Therefore, the most plausible and likely opinion is that the “tondo” would have been carved by a close collaborator of Berruguete, Francisco Giralte, Isidro de Villoldo or Manuel Alvarez, based on a design by de Master.

Since for stylistic reasons we are facing a work later than the San Benito altarpiece and previous to the Toledan period, that is, around the end of the 1530’s, it seems reasonable to compare this work with the altar-piece of the Epiphany of the Church of Santiago in Valladolid, effected in 1538 (also called Altarpiece of the Magi). On the other hand, the fact that in the "sotabanco" (the lowest part of an altarpiece) of this altar-piece are revealed two Florentine garlands, empty in the centre, confirms to us that we must intensify our research in this direction, above all because at the top of the altar-piece there appear as well other garlands, in this case with the face of Saint Peter and Saint Paul in the centre.

According to Manuel Arias’ explanation in his last monographic study on Alonso Berruguete, the altar-piece of the Magi, after being attributed by Cean Bermúdez and Martí y Monsó to Juan de Juní, following on a declaration by Palomino, only becomes considered fully as made by Alonso Berruguete thanks to the discovery by Agapito Revilla of documents testifying to the fact. The profoundly innovative nature of its sculptural composition and architectural design, together with its undoubted link with such important classical Italian sources as the Laoconte and the Epiphany of Leonardo, make it worthy of special study within the whole work of the Master and to some extent represents a transitional moment between the San Benito altarpiece and the work of the choir-stalls of Toledo's Cathedral. As regards its sculptural work, the faces of the persons rendered are full of expressive fervour, mostly clothed in turbans, imbued with a concentric movement towards the Virgin mother, along lines evidently parallel to our “tondo”. The manner of carving the beard of the. medallion’s prophet following soft undulating movements, the way of sculpturing its frown which frames an uneasy and impotent look, its slightly open mouth with an expression of longing, all these coincide with their common model, the Laoconte and with the faces on the Altar-piece of the Magi. Thus the clenched hand carved with specially treated knuckles and ligaments and represented with fierce audacity, concentrates all our attention to the point of competing in importance with the prophet’s face. This is a scenographic sign indubitably characteristic of Berruguete which we specially find in the choir-stall of Toledo Cathedral and also in the hands of San José in the altar-piece of the Church of Santiago in Valladolid. The rhythm of the sculptural movement of the work is simple but extraordinarily inspired, mainly due to the very talented effect of the arm clasping the tunic which indicates a line opposing the gaze of the prophet in a delicate “contraposto” and subtly in accordance with the movement of the folds of the clothing where the lights and shadows suggest human shapes and grant all the strength to the work.

The attribution to Isidro de Villoldo of the carving of the relief has been confirmed by Professor Jesús María Parrado del Olmo who maintains the opinion that he was a collaborator of Alonso Berruguete in the altar-piece of the Epiphany in the Church of Santiago in Valladolid and therefore is to a certain extent less impetuous and uncontrolled.