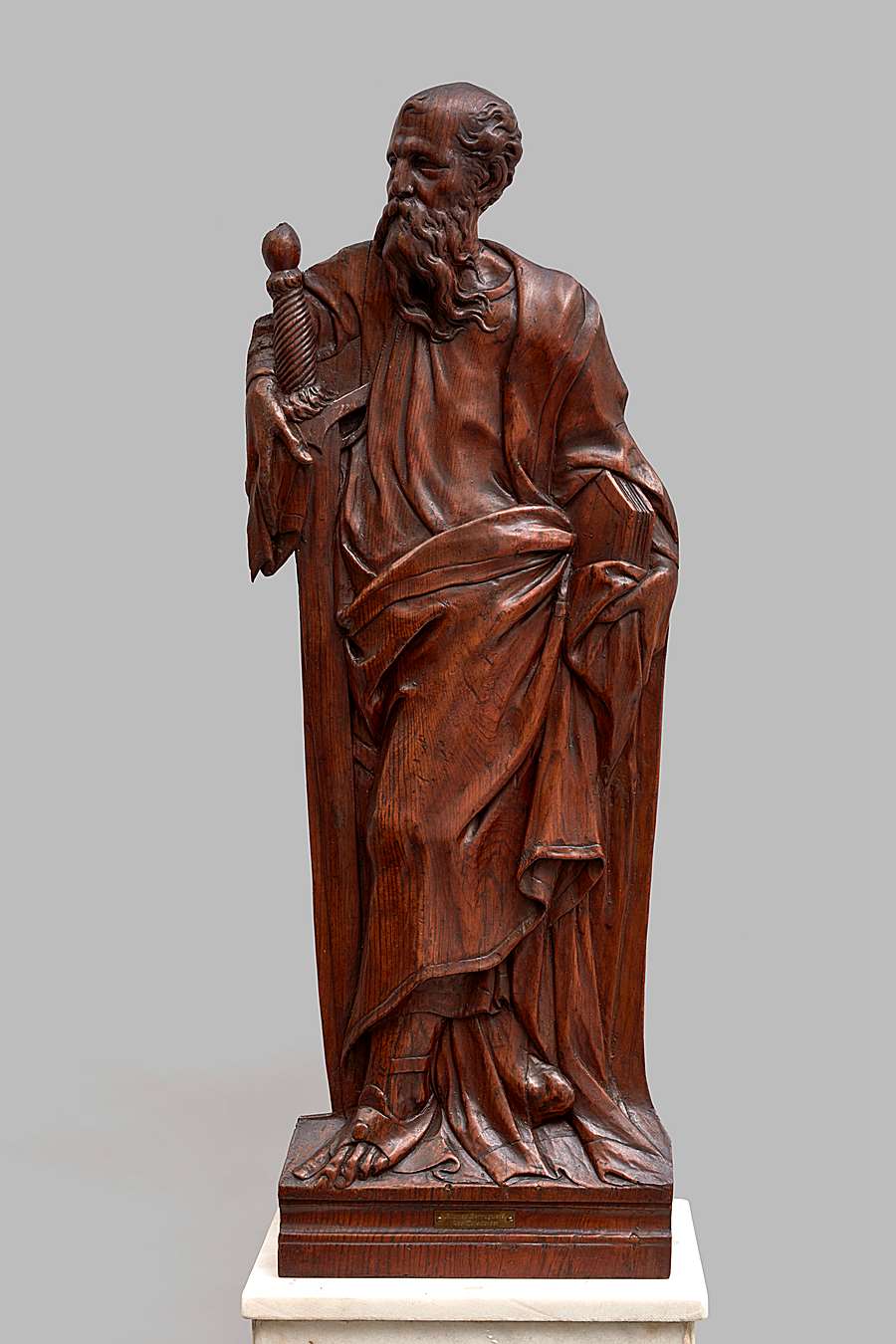 Essay
1. By J.M. Parrado del Olmo
2. Book “Treasures of Spanish Renaissance Sculpture, The origin of the Spanish Manner“
ENQUIRE ABOUT THIS WORK

The low relief we are studying, carved in pine wood, represents the Apostle San Pablo bearing the attribute of a sword which characterizes him. Due to its flat shape, it could have formed part of choir stalls or a pulpit.
Following on the opinion of Professor Jesús María Parrado del Olmo, the exquisite treatment of low relief technique which is very evident in the carving of the sinuous and two-pointed beard of the Apostle, his elongated hands and gently undulating garments together with his tall body and mild nature, lead us to attribute it to the gouge of Isidro de  Villoldo and to situate it in the period when he carries out the altar-piece of the chapel of San Antolín in Avila Cathedral around 1550.

Isidro de Villoldo is, together with Francisco Giralte, the most outstanding collaborator of Alonso Berruguete. Although we know little about his life due to the scarcity of documents, we know for certain that in 1538 he participated in the choir-stalls of the Cathedral of Avila assuredly as assistant to Cornelles of Holland and he must have been there some time previously, which would have permitted him to assimilate the techniques of marble and alabaster carving as well as the Italian moderation of the great master from Avila Vasco de Zarza, a virtue which Villoldo equally displayed.

In 1539 he is in Toledo collaborating with Alonso Berruguete making the choir-stalls of the Cathedral, principally the reliefs of the upper gallery in alabaster whose technique in sculptural carving he dominates. Careful scrutiny and comparison of these works with the best and most characteristic reliefs made by Berruguete in walnut will reveal the rare characteristics of Villoldo: his restraint, moderation and melancholic mood, together with a quest for beauty in form and gesture, all of this in opposition to the modernity, nervousness and passion of Alonso Berruguete. Nevertheless, it is in the symbiosis between the precious sculptural technique of Vasco de Zarza and the ultramodern drawing of Alonso Berruguete that an authentic mannerist Master will be formed, in some degree more advanced than the Italian “romanismo” of the second half of the XVIth century which he will never know due to his early death.

In 1542 he returns to Avila where the prestige of having worked in the Cathedral of Toledo facilitates his participation in the most important projects of the Cathedral of Avila and thus he obtains the contracts of the altar-pieces of San Segundo, inserted in a massive pillar of the cathedral, San Bernabé, probably his masterpiece, both works carved in alabaster, as well as the altar-piece of the chapel of San Antolín which, according to Parrado del Olmo, reveal similarities in style to our relief. Villoldo brings along with himself from Toledo a moderate Berruguetesque style, very close to the Italian mannerism where the folds of the robes swirl as in a musical cadence, the facial features and the leisurely movement of the figures give his compositions a sense of supreme beauty. All this, to a certain extent, will have a greater influence than the frequently restless, passionate and unique genius of Alonso Berruguete, an influence which spread throughout the three important artistic zones where Villoldo worked, Avila, Toledo and Andalusia.

In 1552 he participates with Juan Bautista Vazquez el Viejo in the sepulchre of Cardinal Tavera, which proves the high esteem Berruguete must have had of his marble work; some of the lateral reliefs in this project are carved by his hand, and contain elements very similar to our relief of San Pablo.

In 1553 he goes to Seville, coinciding with other artists of the same Italianate style then flourishing in Toledo, to participate in the Cartuja de las Cuevas and his sudden death will not be an obstacle to showing clearly that he is one of the most transcendental influences in the Spanish Renaissance, inaugurating what will later be the Andalusian school of polychromed sculpture with a carving of a Calvary and eight figures which Juan Bautista Vazquez el Viejo will continue after his death, finishing the altar-piece of the Cartuja de las Cuevas which will be a clear precedent of the masterpieces which a few years later the soaring genius Martinez Montañes will leave to us.