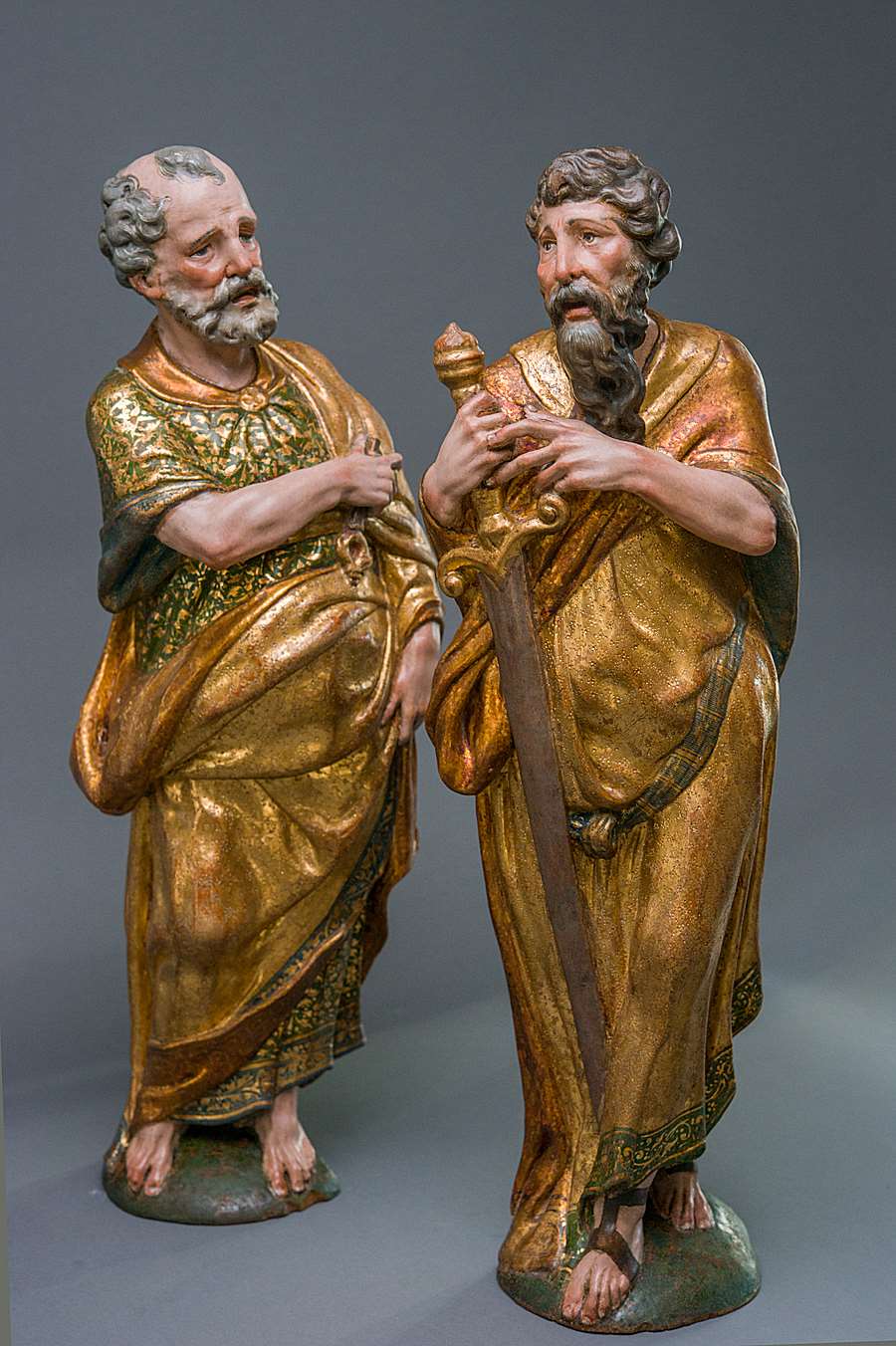 A pair of sculptures of Saint Peter and Saint Paul

Essays
1. by IOMR
2. by J.M. Parrado del Olmo
3. by R.J. Payo Hernanz
4. Book “Treasures of Spanish Renaissance Sculpture, The origin of the Spanish Manner“
5. By Carlos Herrero Starkie
ENQUIRE ABOUT THIS WORK

Pair of sculptures of the Apostles Saint Peter and Saint Paul, carved in walnut wood, free-standing statues, polychromed and hollowed out on the reverse side. Both figures are found in unbalanced equilibrium on a convex base.

Measurements: 54 cm. high.
Author: This is an autograph work by Alonso Berruguete (1488-1561), both in design, sculpturing and polychrome colouring.
Dating: First third of the XVIth century, between 1529 and 1532.
Style: Mannerist Renaissance. Castilian school

Carved walnut wood, water-gilt, decorated with “estofado” and “troquelado” techniques with outstanding execution of “corlas” ”esgrafiadas”. Human flesh is depicted in oil by means of a light, unfinished polishing technique evident in details such as eye sockets or fingers. In the painting of hair, eyes and lips, Alonso Berruguete combines a meticulously detailed effect in the hair of the beard and eyes with another technique which reveals a masterly “bravura” endowing the sculptures with the expressionistic style so characteristic of Berruguete and also his incomparable capacity for combining sculptural and painterly effects in a sculpture. The “estofados” are executed with pigments “al tempera”, in “cardenillo” green and “azurita”, employing the “esgrafiado” technique to represent very finished and stylized vegetal design but which do not follow faithfully a pre-established model.

_ Through several generations in the collection of the Garnica family.
_ Gabriel Garnica Collection (Toledo) till 2015.
_ Subastas Abalarte in October 2015.
_ Private European collection.
_ Bought by the Institute of Old Masters Research in 2016

The sculptures, as Sara Cavero indicates in her detailed report after restoration, are in a specially good state of condition which is unique for sculptures of polychromed wood, dating from the first third of the XVI th century. The sculptures do not show any substantial loss or deterioration and their polychromy is entirely original and does not reveal any later overpainting except partial varnishing. This, together with the masterly execution of the carving and the great variety of combinations of polychrome techniques carried out in such a personal way and not following pre-established models, make this work, thanks to its well preserved condition, its authenticity and homogeneous quality, not only one of the best examples of the artistic genius of Alonso Berruguete, but also an authentic repertoire of the most advanced and best techniques of Castilian polychrome work of the first third of the XVI th century (see Report on State of Condition).