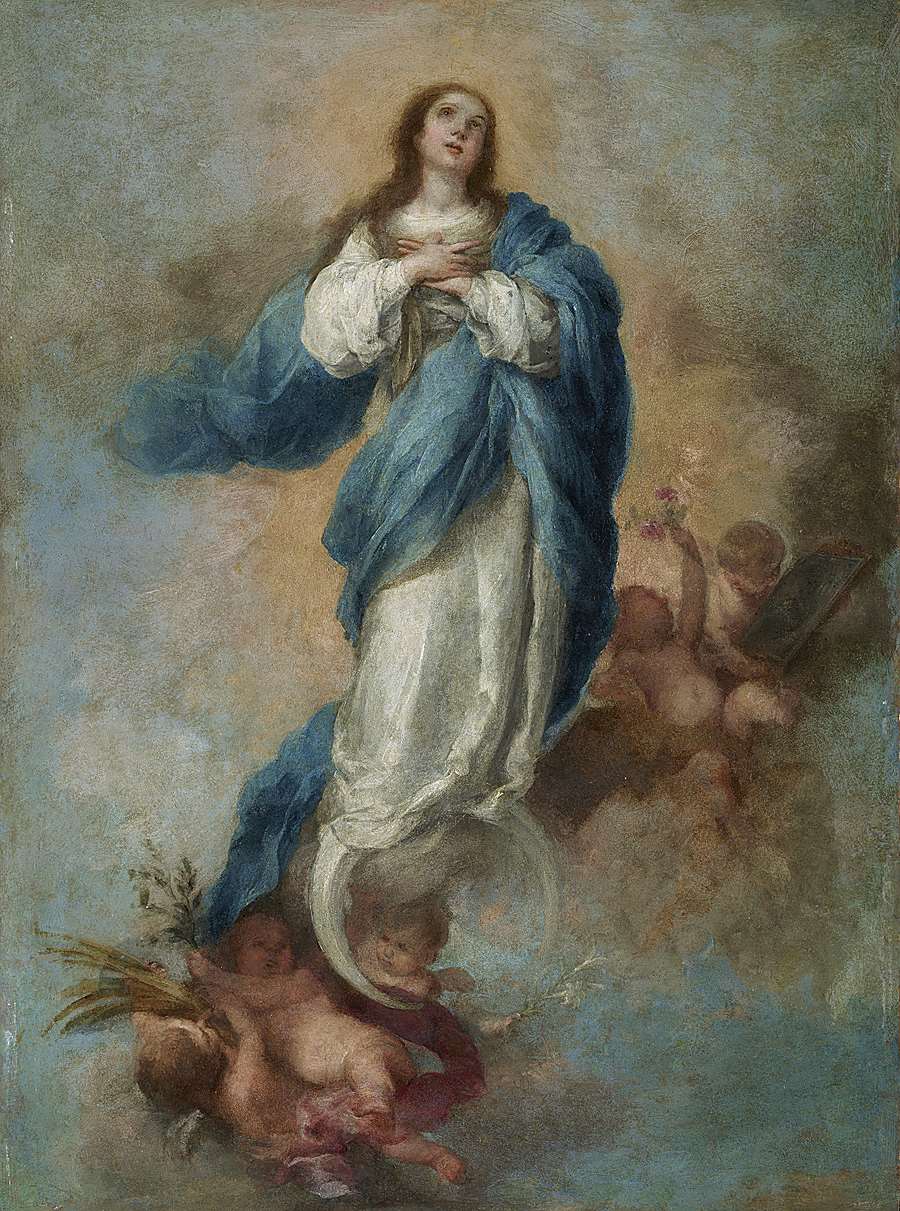 ENQUIRE ABOUT THIS WORK

In the “Catalogue raisonné of drawings” 2002 by Jonathan Brown, “Murillo virtuoso draftsman”, Yale University 2012, cat. 22, p. 90, ilust. 91 and 92 and in Manuela Mena 2015 “Bartolomé Esteban Murillo, 1617-1682, dibujos”. Fundación Marcelino Botín, 2015, there appears a drawing representing “angelotes”, Hamburg Museum, Kunsthalle (inv. 38596), which Jonathan Brown considers a preparatory drawing by B. Murillo for an “Inmaculada” and in his article published in the review Ars/2016 previously mentioned, he specially connects it with the “angelotes” of the lower part of the copper we are now studying.

Comments on the autograph identity of this “Inmaculada” by Bartolomé Murillo

The work we are now studying is a magnificent and hitherto unknown example of a “lamina” of copper painted by Bartolomé Murillo representing an absolutely unique and independent Immaculate Conception. This was his favourite subject and thanks to it he gained universal fame. All this, together with his exceptional pictorial quality and outstandingly airy technique, characteristic of Murillo’s new style of the 60’s just after his trip to Madrid in 1557, makes the recent discovery of this picture by the Master an important addition to the autograph Corpus of Murillo. In fact, up to the present, only four coppers have been identified as representing the “Inmaculada”. Murillo’s plates form a part of his work which has been in a way avoided by XIXth century researchers of this painter. In the XXth century Diego Angulo only indicates in his Catalogue Raisonnè three “Inmaculadas” painted on copper: one belonging to Georges Vivian, Bath (27,5 X 18,4 cm.) sold by Sotheby’s 2003 for the price of 300,000 pounds, the one which belonged to the Prince of Asturias  (future Carlos IV) for his collection of paintings in his Cabinet in the Prince’s House at the Escorial (47 x 33,5 cm) which is probably the “Inmaculada” which the Arango Collection bought at Sotheby’s Amsterdam in 1985, and finally the one identified by Palomino and Cean as hanging in the sacristy of the Cartuja de Granada measuring a  “1/2 vara”, to which we might attribute our “Inmaculada”, due to its being the one whose measurements are closest. Jonathan Brown in 1976 is the first modern authority on Bartolomé Esteban Murillo who insisted on the importance of the small size works painted on “láminas” in the Corpus of Murillo’s works. He was followed along this line of research by Claude Ressort, Olivier Meslay of the Louvre and Duncan Kinkead, but it is, above all, William B. Jordan who studied in depth this question in his article “A forgotten legacy, Murillo’s cabinet pictures on stone, metal and wood” for the catalogue of the exhibition of Bartolomé Murillo: paintings from American collections, March 2002 at the Kimbell Museum, Fort Worth. He indicates in this article the deep appreciation that the great patrons and collectors of Murillo, such as Justino Neve, Omazur  and Van Belle, felt for these small size works, due to their  being specially made with care for collectors who precisely required and understood this quality of work. Thus in the inventory of Justino de Neve’s testament (1685) appear a list of 24 “láminas”. In Omaruz’s will containing 27 original paintings by Murillo, seven of them were “láminas” on copper obsidian or other stone. Likewise, nine “láminas” appear in the inventory drawn up by his son Gaspar in 1685 on the occasion of his death. Bill Jordan considers these works as absolutely independent, created for personal devotion, painted with a technique which was both detailed and polished and, at the same time, free and direct, where he combines with incredible and conscious skill the play of “veladuras” which is so appropriate for a surface like copper. This is what distinguishes his work from sketches, always used by Murillo on canvas supports and with a much more dynamic execution, and where he alternates finished elements with very sketchy areas, as in “Inmaculada niña” (Louvre M1144). William B. Jordan, after having seen our “Inmaculada”, has no doubt in attributing this copper as an autograph work by Bartolomé Murillo and in considering it one of his works painted in the 60’s decade by the hands of the Master for personal devotion. At present, apart from this work, only three other “Inmaculadas” on copper are known: the ones mentioned above, the “Inmaculada” of the Georges Vivian Collection, that of the Arango Collection and that of the old Forum Filatélico Collection (96 X 64 cm) bought by the Spanish State and at present exhibited in the Museo Nacional de Bellas Artes de Sevilla.

The spiral composition is absolutely unique in Murillo’s work and reminds us of the “Inmaculada“ of Oballe which Murillo could have seen during his trip to Madrid in 1657. The way he paints Our Lady’s white tunic, with those successive and twisting folds treated with a careful work of “veladuras” and transparencies, contrasting clearly with the vivid “lapizlazuli” blue of her cloak which Murillo only uses for his “Inmaculadas”; this is, doubtless, a reliable touchstone to prove that the work is fully autograph by Murillo and to be dated later than 1660. In this sense, the way he represents the sky, creating inner as well as ascending space by means of piling up cotton-wool clouds which frame two groups of “angelotes” situated at a most original oblique angle, all this together with subtly blended blue and orange tones bathed in a faint golden light risisng upwards with an ethereal movement. This no doubt evokes in us many of the best compositions of his contemporary artist and friend Francisco Herrera El Mozo 1627-1685) who on these has just come back from Italy, bringing to Spain those very tones and that almost Rococo movement which seems to foretell the arrival of the XVIIIth century.

In this “Inmaculada” we find an evident connection with the paintings which Murillo made commissioned by Justino Neve for Santa María la Blanca and specially his “Inmaculada” (Louvre Museum  p.927) or his “El sueño del Patriarca” (Prado Museum p.994) inasmuch as we perceive in them a Murillo totally immersed in a creative urge which drives him to form that very personal style that blends matter and colours by means of continual  “veladuras”, endowing his compositions with a softness and sweetness and at the same time with a most ethereal movement. All this is carried out with an exquisite technique, apparently loose and dynamic but which is the result of laborious and careful work. It is the period of greatest creative activity and the moulding of a personal stamp which then culminates in the decade of the 70’s with the “Inmaculada” of Aranjuez (Prado Museum p.974) and his second version (Cleveland Museum of Art, 1959  189), with his ever ascending celestial movement which only Murillo knew how to express, characteristic of his last decade. Ignacio Cano links the composition of our copper with this peak period as it is a precedent for this “Inmaculada” and in this sense can be considered one of the first works in which Murillo studies the movement “in su” which later became one of the signs establishing his identity in art.

One question which is of interest to analyse is the existence of evident “pentimenti” at the enel  of the blue cloak of our “Inmaculada” and also in the lower group of “angelotes” where we crearly perceive that Murillo modifies the position of the left arm of one of the angels. These “pentimenti”, which are exceptional in the pictorial work of Murillo, are, in this case, invaluable material enabling us to study the Master’s creative process and permitting us to link these corrections with the drawing of angels at the Kunsthalle Museum which correspond, with a few exceptions, to the lower group in our “Inmaculada”, as indicated by Jonathan Brown in his article in the review Ars 2016.

We wish to express our gratitude for the cataloguing of this work to Ignacio Cano, Curator of the Museo de Bellas Artes de Sevilla, Benito Navarrete and Willian B. Jordan who, after viewing the work “in flesh” have, all three of them, coincided in assigning its date as around 1660, also to Jonathan Brown for his generous contribution linking our “Inmaculada” with the preparatory drawing of the “angelotes” (Kunsthalle Museum) and to Enrique Valdivieso for confirming its attribution to Bartolome Murillo after seeing an image of the copper.

Note regarding the reverse side of the work: an engraving of the great martyrdom of catholic preachers who evangelised Japan occurred in Nagasaki in 1622

One of the most exceptional questions of this work and a proof of the enormous importance which Murillo must have given to it is the fact that it was painted on a copper-plate used for engravings at that time valued at a high price and considered nowadays of great historic interest due to its representing on its reverse, via an engraver’s chisel, the most terrible genocide committed against the Portuguese and Spanish religious orders in their evangelisation of Japan: the massacre occurred in 1622 in Nagasaki, Japan, of the preachers belonging to a Spanish Dominican mission which departed from Filipinas in 1609 to evangelise Japan. These historical facts are now of great public interest thanks to the book “Chinmoku” by the Japanese Catholic writer Shusaku Endo (1923-1996) and the film “Silence” (2017) by Martin Scorsese which, make allusion to the killing of Nagasaki and in certain parts they relate truly what is described in this engraving.

The copper-plate engraving, as we may read in the original, is entitled “Triunfo de los religiosos de la provincia de Ntra. Sra. del Rosario de Philippinas de la orden de predicadores tostados a fuego lento por predicadores del Sto. Evangelio en el reyno de Japon” and dated 1622. In it is shown in detail how the massacre took place, how the preachers were tied to a stake and burnt alive over a low fire. The Japanese, to frighten them, placed in front of them the heads of the beheaded preachers so as to terrorize them even more so that they might abjure their faith and once dead they scattered their ashes in the sea so that there would be no chance of devotion to their relics. On one side appears the prison made of trunks of wood measuring 6 X 4 “varas” (1 “vara” is 88 cm) where 33 Christians awaited death; on the other , a crowd of spectators, some on foot and others in boats, according to the engraving there were more than 60000 people between Christians and infidels. In a corner on the left appears the tyrannical judge and just in front of him and below the title appears Alfonso Navarrete, one of the principal priest who was killed before the massacre and who appears just before he was beheaded and therefore not burnt alive. In the lower part of the engraving appears a list of the main preachers assassinated, each name linked by means of letters with persons perfectly portrayed at the time of his death. Amongst them are Alfonso Mena, Tomás de Zumárraga, Jacinto Orfanell, Alfonso Ferrer Orsuchi, Pedro Vazquez, José de San Jacinto and Francisco Morales, Head of Dominican mission which left Manila in 1609, amongst others. All of them carried out lengthy chronicles describing their sufferings as evangelist and martyrs. They were considered national heroes for defending the true dogma and doubtless there spread around them a certain legendary halo.

Probably the copper to which Palomino and Cean refer as hanging in the sacristy of the Cartuja, Granada, whose measurements, ½ “vara” (42 cm) approximately coincide.
Conde de Casa Rojas Collection. Supposedly acquired by the V th Conde de Casa Rojas, José Maria de Rojas y Galiano (1850-1958) and by descended through various generations in the same family until 2015.
Private European Collection (2015).
Acquired by the Institute of Old Masters Research in 2016.

Appears referred and illustrated as the autograph work of Murillo in an article by Jonathan Brown published in the review Ars 2016 “Murillo en sus dibujos”, pp. 138-139, Revista Ars nº 31, julio-septiembre 2016