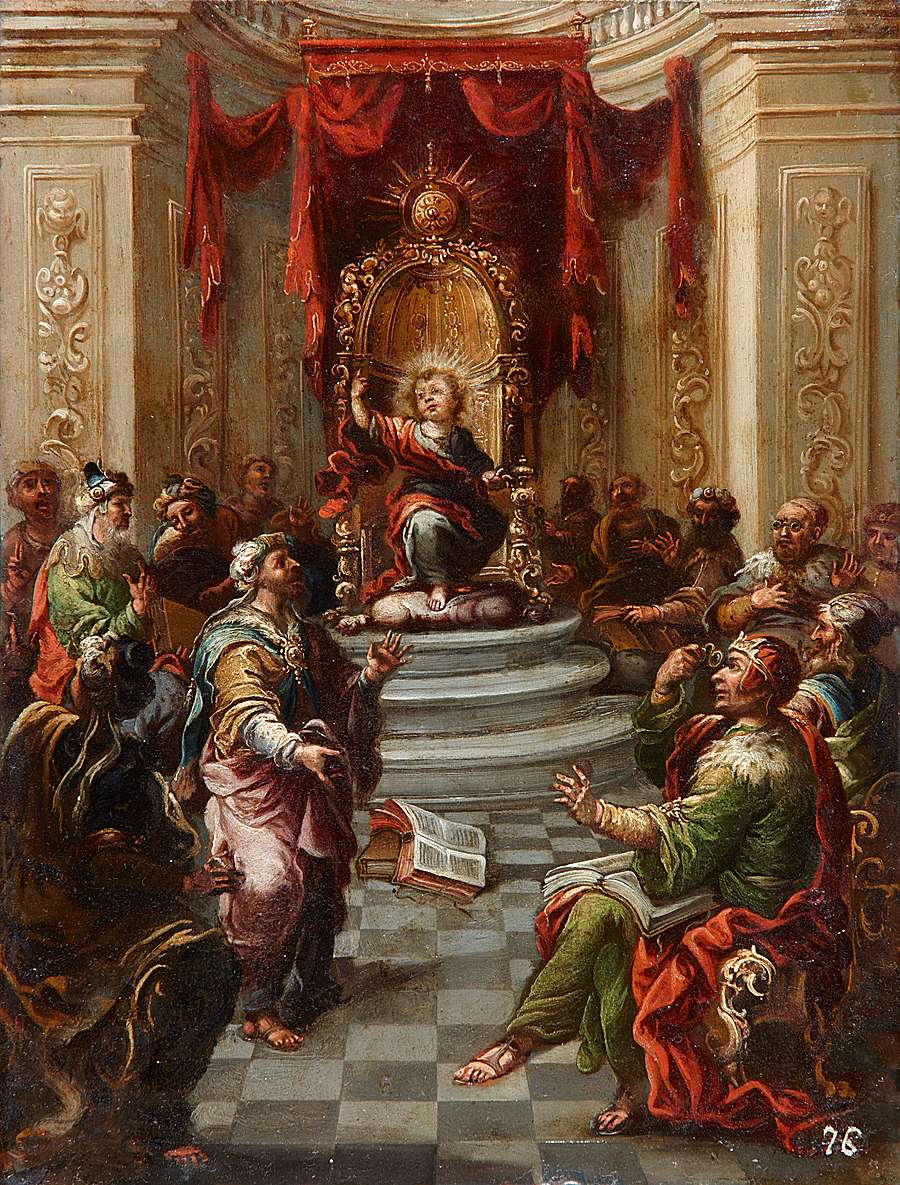 Jesus among the doctors

The copper we are studying is a magnificent example of the best work by Juan Valdés Leal. His style appears perfectly outlined from 1660 onwards, once he has assimilated the decidedly baroque currents in the modern influences brought particularly by Francisco de Herrera “el mozo”(the young man) and which he finally consolidates after his six months’ sojourn in Madrid in 1664 during which he knows directly the royal collections.(1)

The painting reveals characteristics common to all Juan Valdés Leal 's work during his Seville period (from 1657 onwards).

The theatrical quality of the composition, emphasized by the central figure of Jesus, seated on a throne raised up three steps, and the vitality of the persons surrounding him are points identifying Valdés Leal the scenographer(2).

The “contraposto” of the expressions of meditation and admiration of the persons on the right as opposed to those on the left, transmitting disagreement or exclamatory arguments, and the undulating curves of the robes of the persons wearing the Jewish fashion whose personal physiognomy is recognizable in many of the Master’s works, these characteristic signs are constantly observed in Valdés Leal’s paintings(3) (4) (5).

The virtuosism with which he paints the semi-circular niche with fluting like a scallop shell surrounded by vegetation and gilt, as if it were in pure gold reminds us that Valdés Leal was an artisan gilder. The square canopy, with fringed borders and gilt tassels, from which hang four vermilion curtains reveals to us the Valdés Leal decorator of fleeting architecture for Seville feast-days(4).

The importance of the architecture which surrounds, limits and gives realism to the scene, creating space in a detailed study of perspective and architectural elements, is the touchstone in most of his compositions and which, on this occasion, the artist situates in a temple of classical architecture in baroque style, with a semicircular apse with lofty square cornices where the artist situates a continuous balustrade like a very Italianate platform(3).

The magnificent plasterwork which is constantly evident in his Sevillian work, and which he here inserts in his flat and delicately moulded pillars which appear like low-reliefs of heads and the stalks of vegetation, remind one specially of the rich decoration consisting of bark, leaves and angels of Santa María la Blanca canonised in 1665. Juan Valdés Leal participated as a scenographer in the decoration covering the principal door of the church(3) (7).

Finally, the splendid colouring with its veiled tones, its different shades of colour, its contrasts and degrees of light, manages to constitute, as Camón Aznar says, “a symphony of tones”, in this case of bluish, green, reddish and rosy tones which “from 1660 onwards become darker and warmer, creating a foggier and more mixed atmosphere which wraps around persons and objects.

Nevertheless, there is something which makes this copper unique among Valdés Leal’s work and which makes us think that its execution may have been effected just after the time of his six months’ sojourn in Madrid in 1664; in any case, under the impact caused by his viewing the Flemish and Italian works of the royal collections(1).

The balance in the composition, which is peculiar to Italian classical painting, the elegant movement of the personages, the perfect harmony of their gestures, expressions and looks which fill the whole scene, and the architecture which is, if possible, more Italianate than Sevillian due to the inclusion of the balustrade and the use of central perspective; in short, the decisive intention of the painter to create an essentially beautiful work finishing off every detail; all this is something which, to a certain extent, is beyond the Valdés Leal of brilliant technique, of loose, ample and vibrant brush-strokes, great compositions, flaming, scarcely sketched shapes, strong expressions and mentally impetuous attitudes and the unbalanced emotion and aestheticism which pervade his artistic genius(8).

The discovery of the works by Rubens, Titian, Van Dyck and the Genoese painters at the Escorial, and also works by Ricci and Claudio Coello(9) who painted just in 1664 his magnificent “Triumph of San Agustín”, had a moderating effect on Valdés Leal, arousing in him hitherto unknown capacities which only in such a small-sized work he felt the need to demonstrate, assuredly due to the commission of an important collector, according to the testification of Nº 76, painted on the lower left side of the copper.

On contemplating this work, the commonplace cliché, favoured by obsolete art historians, of a macabre Valdés Leal, author of terrible, bloodthirsty scenes, is far off the mark. Study on him is now completely in line with the research carried out by Enrique Valdivieso and other authors on the work of Juan Valdés Leal, who have achieved establishing a new image of the Master which has paved the way for various interpretations, but all of them coincide in their maximum and universal qualification. In conclusion, I would like to point out the following: “Valdés Leal, the most truly baroque of our artists and doubtless the one whose language is most violently personal” (Enrique Valdivieso). “The best colour painter of our country, greater even than Murillo” (Mayer). “The most modern of all the painters of our Golden Age” (Camón Aznar).

We are grateful to William B. Jordan for confirming the attribution of this copper to Juan Valdes Leal and endorsing this catalogue entry, after viewing the painting in original .