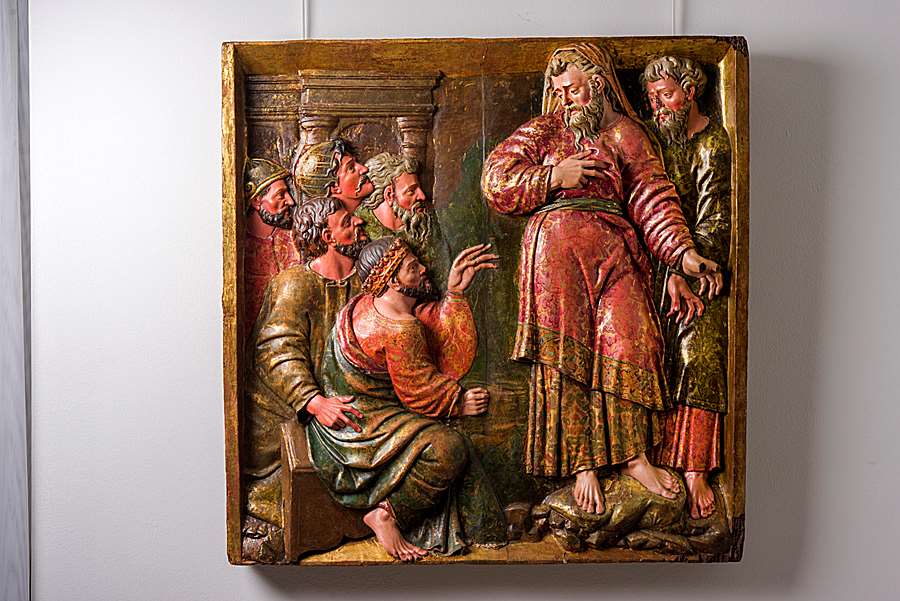 Read blog: By Carlos Herrero Starkie
ENQUIRE ABOUT THIS WORK

The relief-work we are studying constitutes an important addition to the catalogue of works carried out by the sculptor Arnao de Bruselas, the most important sculptor of the first half of the XVIth century who worked in Aragon, Navarre and La Rioja, a zone which, according to George Weise, is surprising for the wealth and high artistic value of its heritage which competes on many occasions with the virtuosity and expressiveness  of the  best works of Berruguete, Valmaseda, Giralte or Juan de Juní.

Our relief, carved on two walnut panels around 1557 and with a typical Riojan polychromy, in an excellent state of condition, carried out then years later by Francisco Fernandez Vallejo, one of his most sublime polychromers, is a magnificent example of the so-called “Romanismo” which will dominate the second half of the XVIth century. It represents the prophet Nataan rebuking King David, though it might also represent the prophet Balaam casting a curse on the people of Israel in the presence of King Balaat.

Arnao de Bruselas is supposed to have arrived in Spain during the 1530’s, probably like almost all the sculptors of northern Europe, disembarking at some Cantabrian port, perhaps at Portugalete, where he must have contacted the work-shops of the Beaugrants who were very active in the zone. He must also have established contact with the work-shop of Andrés Araoz and, as M. Asunción Arrazola correctly points out, must have participated in the relief work on the bench of San Andrés of Eibar where the Araoz artists worked. This supposition is based on the fact that in the reliefs on this bench various apostles, one of which had features closely resembling the two principal persons of our relief, have, in their flat topped skulls, their fleshy half open lips, their short, thick and curly beards, their prominent cheek-bones and noses, the characteristics of Arnao de Bruselas and not those of Andrés Araoz who, nevertheless, is the person who signs the contract. In fact, this attribution to Arnao de Bruselas of works historically considered by experts as works done by Andrés Araoz or by the Beaugrants, due to the latter artists being the heads of the principal workshops of the Basque-Navarre and Upper Rioja zones, is a constant ruling of the last few years during which there has been deep research in the work of Arnao and we find it perfectly identified, for example, in the San Esteban fo the Church of Genevilla (Navarre) today unanimously considered a masterpiece by Arnao de Bruselas.

From the documentary point of view we know for certain that Arnao collaborated officially from 1537 onwards in the altar-piece of Sto. Domingo de la Calzada, the last work of Damian Forment and that together with the Beaugrant they had to finish their sculpture works on the basis of drawings which Damian Forment left when he died in 1540. Arnao de Bruselas must have known the work of Alonso Berruguete, either directly or by means of the painter Andrés de Melgar who was the polychromer of various works by Berruguete and author of many of the polychromies of the altar-piece at Sto. Domingo de la Calzada. In any case this influence, together with the basic traces which Damian Forment left in Arnao leads the development of a very personal mannerist style which up to the first years of the 1550 decade characterises Arnao de Bruselas’ work, whose best examples are to be found in the reliefs in the churches of Sonsierra, La Población, Genevilla, all of them in the zone of Navarre and the Upper Rioja and  in 1552, in a more moderate, though equally mannerist, style in the altar-piece for Sta. Maria del Palacio (Logroño) where we have documentary evidence of his participation in this work. From 1557 onwards Arnao’s work acquires greater tranquillity and calm, as typically “romanista” style of this period, assuredly due to knowing at this time Gaspar Becerra who was working in Zaragoza in 1557 on his return from Italy. This was just when Arnao signs the contract for the altar-pieces at Veruela (Zaragoza) and for the southern side of the retro choir (trascoro) of the Metropolitan Cathedral of the Salvador in Zaragoza, where he culminates one of his Masterpieces in close stylistic relationship with our relief.

The relief which concerns us has close stylistic connections with the San Juan and San Mateo  on the bench of the altar-piece of San Juan at Eibar, with the altar-piece of the chapel of San Fernando of the Monastery at Veruela (relief on the death of San Luis) and specially with San Vicente Mártir of the retro choir of the metropolitan Cathedral of Zaragoza; the soft swaying movement of the folds of the prophet’s tunic, his broad head with prominent cheek-bones, his elongated and elegant hands, his delicately marked “contraposto” his fleshy half open lips which scarcely allow the teeth to be seen, and, at the same time, in clear connection with the San Vicente of La Seo, the inclination of his head and the position of his hands. Other characteristic of Arnao perceived in our relief are his very personal way of treating feet, which are represented as big, elongated low heeled and often with separate toes, its protuberant noses, aquiline profiles, the king’s and his servers’ bulging eyes, all represented  in profile following the design of Arnao’s reliefs in the altar-piece of Algodoncillo (Presentation of the Child Jesus ant the temple).

Finally, we ought to point out the magnificent polychromy quality which has to be fully autograph by the polychromer Francisco Fernandez Vallejo and carried out around 1567. The exquisite and delicate branches of trees, birds and fruits which we perceive on the borders of the tunics, all done in oil using the tip of the paint-brush, expressing volume and a splendid combination of almost all colours, which is characteristic of the polychromy in Rioja during the second half of the XVIth century which left aside the masquerades and grutesques derived from the Roman tradition, caused by the impact of the paintings of the Domus Aurea, the drawings of Giulio Romano and the engravings of Marco Antonio Raimondi and Cornelis de Vriendt, the twisting multicoloured “esgrafiados”, the pompous quilted clothing enlivened by the perfect play of light and shadow, all this gives a stimulating air to the scene which attracts the viewer in accordance with the principles of the Counter-Reformation announced by the Council of Trento. In this declaration the Council indicates clearly to the polychroming artists the method they should adopt, advising against representing mythological persons, temples, indeterminate or fantastic figures and urging a more natural representation which would be more familiar to the Christian believer. In fact, polychromy from Rioja, and specially Francisco Fernandez Vallejo’s polychromy is considered the greatest exponent of this Art. CHS