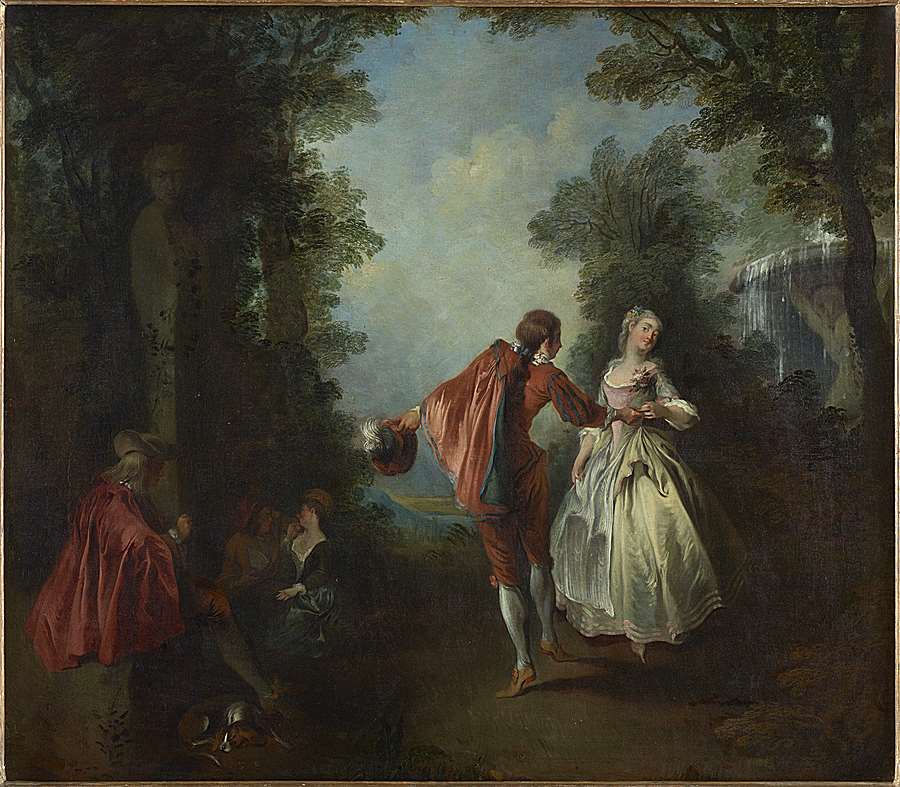 As noted by Mary Tavener Holmes (written communication, 14 September 2016), this large-scale fête galante was almost certainly painted around 1725 by Lancret as an overdoor for an as yet unidentified interior decor. Lancret, like Antoine Watteau, often recycled favorite motifs in new compositions, and Dr. Holmes notes that the dancing couple also appeared in the painting Dancing Couple in a Landscape, formerly in the collections of Frederick the Great and once hanging in the Rheinsberg Schloss, where it was destroyed in 1945 (see M. Tavener Holmes in Franzosische Gemalde, I, Berlin, 2011, no. 60; and Wildenstein 1924, no. 148), and in the much larger Fête Galante with a Large Doric Pavillion now in Charlottenberg (Holmes 2011, no. 53; and Wildenstein 1924, no. 335). A red-chalk study for the dancing man seen from behind is in Waddesdon Manor and was published by Anthony Blunt in 1973 (Drawings at Waddesdon Manor, Master Drawings II, London, 1973, p. 363, no. 6). A similar fountain is found in several other paintings by Lancret, including the Pied-de-Boeuf in Charlottenberg (Holmes 2011, no. 68; Wildenstein 1924, no. 248).

Our thanks to Dr. Mary Tavener Holmes for examining the present painting in person and confirming its attribution to Nicolas Lancret.